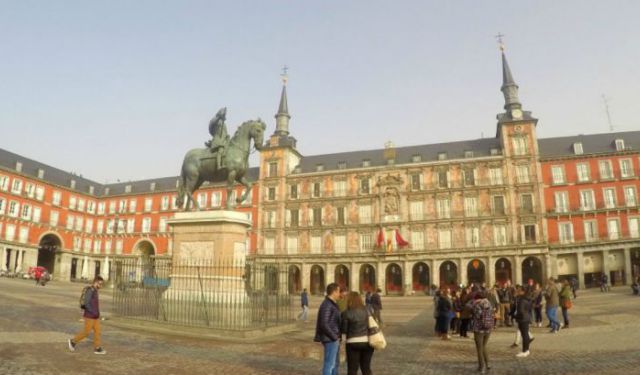 13 Things We Learned in Madrid, Madrid, Spain (B)

We booked our flight to Gran Canaria through Madrid so decided to travel there a day earlier to explore the city. In the morning we went on a free walking tour of Madrid, where we learned a lot of interesting facts…

1. You’ll find a statue of a horse in Plaza Mayor. Back in the day people wondered why it always smelt so bad around the horse. Eventually they decided to open it up and found bird skeletons! It was later discovered that since the horse’s mouth was open, birds would go in through the mouth but not know how to get out so would end up dying inside.

2. In Madrid all cafes and restaurants open around mid-morning so keep that in mind when searching for a place to have your morning coffee.

4. The oldest restaurant in the whole world (according to the Guiness World of Records) is in Madrid. For €40 per head you can eat there like a king or queen.

5. Why is tapas called tapas? Apparently, once upon a time the king went on a trip to the South of Spain and stopped in a pub for a drink. It was very windy in the South so as the bar tender was serving the king his drink, lots of dust blew through the windows into the glass. The waiter didn’t want to disappoint the king so he covered the glass with a slice of ham. The king looked confused and asked “What is this?” so the nervous waiter thought fast and blurted out “Tapas!” which was derived from the Spanish word ’tapar’ meaning ‘to cover.’ 6. How did tapas become popular in Spain? Hundreds of years ago poor farmers only had enough money at the end of the day to buy either food or alcohol so they would always choose alcohol. Since they were always drunk they stopped producing enough food for the people of the kingdom so the king decided that every drink served in a bar would have to come with some food, which solved the problem. ...... (follow the instructions below for accessing the rest of this article).
This article is featured in the app "GPSmyCity: Walks in 1K+ Cities" on iTunes App Store and Google Play. You can download the app to your mobile device to read the article offline and create a self-guided walking tour to visit the attractions featured in this article. The app turns your mobile device into a personal tour guide and it works offline, so no data plan is needed when traveling abroad.