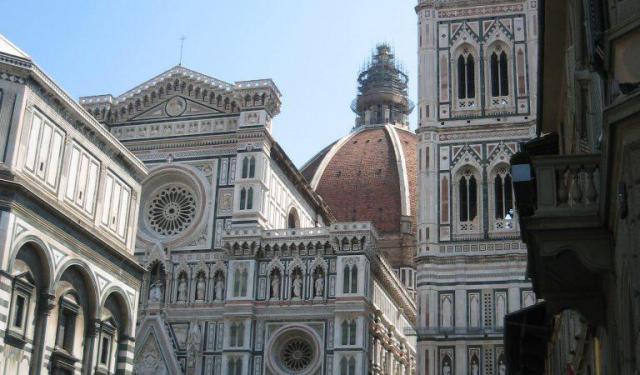 Florence, Italy is an iconic, ancient city that really encompasses the true heart of Italian food and culture. It’s crowded, busy, and colourful, and is a mandatory stop for anyone visiting this beautiful country. The biggest highlights, fortunately, can be crammed into one (very full) day. Here are my top 5 sites in Florence to experience, even if you only have a day to visit!

The Palazzo Vecchio was built in 1299 as a fortified palace for the magistrates of the commune. During the mid-sixteenth century, the palace was home to Cosimo I de’ Medici, the second Duke of Florence. The palace is still in use today as Florence’s city hall, but many sections are now open to the public as a museum and archaeological site. In fact, the hall was built upon the ancient Roman ruins of a 1st Century AD theatre, the remains of which can be viewed from the basement level. The interior rooms boast impressive frescos, murals, gold detailing and imposing sculptures.

You can also tour the secret passages, visit the private apartments, and walk along the battlements. The building is right in the Piazza della Signoria square, which makes it conveniently close to other attractions on this list. ...... (follow the instructions below for accessing the rest of this article).
This article is featured in the app "GPSmyCity: Walks in 1K+ Cities" on iTunes App Store and Google Play. You can download the app to your mobile device to read the article offline and create a self-guided walking tour to visit the attractions featured in this article. The app turns your mobile device into a personal tour guide and it works offline, so no data plan is needed when traveling abroad.