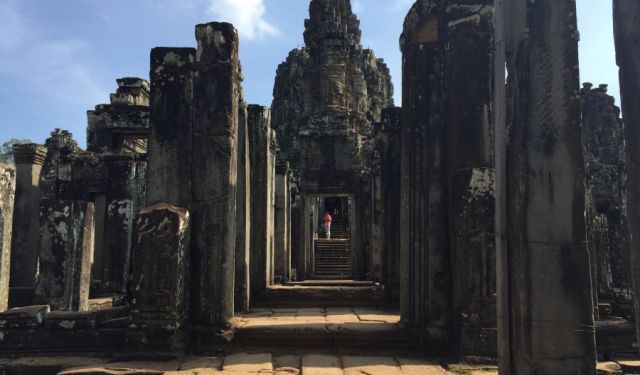 Speaking of Cambodia, first thing comes to mind is always Angkor Wat, it’s a loooong history as it was originally constructed as a Hindu temple for the Khmer Empire and gradually it transformed into a Buddhist temple toward the end of the 12th century.

We get welcoming drinks and then rested a while in the hotel before heading out to the market. Frankly, I was exhausted already after 20 mins tuk tuk ride from Airport to town, but the very nice boutique hotel did cheered me up a bit.

It’s a boutique hotel with about 8-10 rooms and we have already occupied 4 rooms so basically it’s like we owned the whole hotel!

First, it’s the really far away temple > Beng Melea (75km), the entrance fee is $5 each person. On the way, when we saw this little stall by the roadside, we pulled off the car aside and bought some of these bamboo sticky rice! ...... (follow the instructions below for accessing the rest of this article).
This article is featured in the app "GPSmyCity: Walks in 1K+ Cities" on iTunes App Store and Google Play. You can download the app to your mobile device to read the article offline and create a self-guided walking tour to visit the attractions featured in this article. The app turns your mobile device into a personal tour guide and it works offline, so no data plan is needed when traveling abroad.