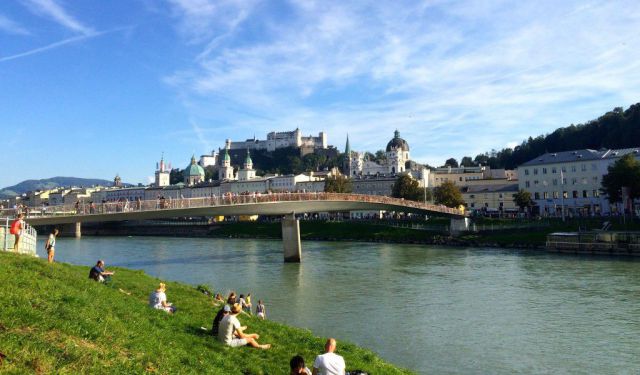 5 Reasons on Why Salzburg Needs to Be on Your Bucket List, Salzburg, Austria (B)

Salzburg is the home of Mozart, a historical city centre full of baroque architecture and the world-famous musical The Sound of Music. Do you need more reasons to go? Then take a look below.

In around 15 BC, Salzburg was an important town in the Roman Empire (back then it was called ‘Juvavum’), and around year 700, it was named ‘Salzburg’ (meaning ‘salt castle’) – deriving from the barges carrying salt on the Salzach River. In the 18th Century, the city grew to be one of Europe’s leading cultural hubs. Mozart was born here and Salzburg also played an important role in a philosophical movement called ‘The Enlightenment’ – a group of ‘free thinkers’, who played an important role in the development of modern society.

Even though Salzburg is not a significantly big city, it is home to three universities and therefore regarded as a centre of education. One can easily feel the mix of younger and older generations when walking in the streets. Students are busy shopping or hanging out in cafés while older Austrians enjoy an afternoon stroll or a trip to the opera, and it feels very natural. ...... (follow the instructions below for accessing the rest of this article).
This article is featured in the app "GPSmyCity: Walks in 1K+ Cities" on iTunes App Store and Google Play. You can download the app to your mobile device to read the article offline and create a self-guided walking tour to visit the attractions featured in this article. The app turns your mobile device into a personal tour guide and it works offline, so no data plan is needed when traveling abroad.

Create Your Own Self-Guided Walks in Salzburg
Guide Name: 5 Reasons on Why Salzburg Needs to Be on Your Bucket List
Guide Location: Austria » Salzburg
Guide Type: Self-guided Walking Tour (Article (B))
Author: Regitse Cecillie Rosenvinge
Read it on Author's Website: http://thecopenhagentraveler.com/5-reasons-on-why-salzburg-needs-to-be-on-your-bucket-list/
Sight(s) Featured in This Guide: