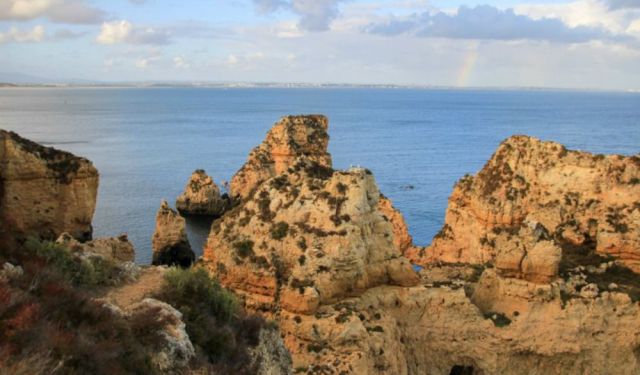 The Algarve Region has been a dream of mine for so long, I never thought I’d actually get to see it with my own eyes. But after exploring the capital and visiting the fabulous Pena Palace in Sintra, we hopped into a rental car in Lisbon and drove down the Western part of the Algarve Coast. We’d end up spending 6 wonderful days on the Portuguese coast of the North Atlantic Ocean, of which 2 entire days were in Lagos. The small town blew us away the moment we did a quick Google Search 9 months prior to our trip, with its colorful streets, chill atmosphere and out-of-this-world beaches.

So without further ado, here are a couple of the most beautiful places in Lagos, the small coastal town of Portugal:

Lagos (not to be confused with Nigeria’s largest city) is a charming little Portuguese town with a population of just a little more than 22,000 residents. It’s highly popular among tourists for its exceptional Atlantic coast, boasting tons of fascinating rock formations. Two of its beaches – Dona Ana and Camilo – are always included among the top beaches in the Algarve region. Its look-out point called Ponta da Piedade is an amalgam of grottos, cliffs and rock pillars offering an unforgettable scenery. Albeit the town is often overshadowed by its natural features, in my mind it’s still worth a short stroll. You should at least check out the town centre, the castle, its main church and get lost between its narrow streets before hitting the beach. ...... (follow the instructions below for accessing the rest of this article).
This article is featured in the app "GPSmyCity: Walks in 1K+ Cities" on iTunes App Store and Google Play. You can download the app to your mobile device to read the article offline and create a self-guided walking tour to visit the attractions featured in this article. The app turns your mobile device into a personal tour guide and it works offline, so no data plan is needed when traveling abroad.