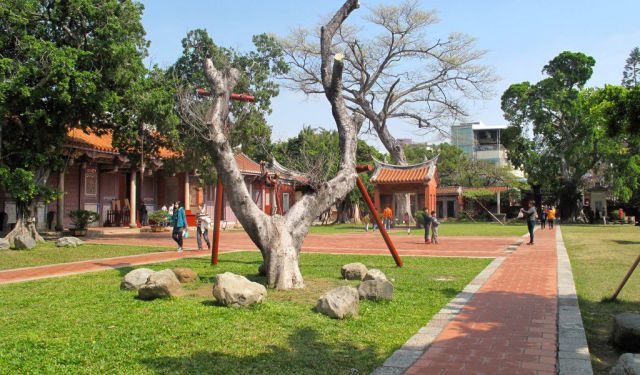 Though we only spent three nights there (and one of them was when an earthquake with a magnitude of 6.4 struck), Tainan was one of our favourite places we visited in Taiwan. It’s a relatively small city with a reasonably walkable historical centre where most of the places of interest are to be found.

It is actually the oldest city in Taiwan, something which is quite obvious when coming from other cities which we generally found to be rather ugly and clearly laid out on a very boring grid system. It’s also blessed with good weather year most of the year, never dropping below 15C even in winter. In summer, however, it can get into the low 30s with very heavy rainfall.

Located in the former Tainan City Hall, this free museum has a variety of displays about the history of Taiwanese literature, including artefacts from the Japanese rule and from mainland China. There is some signage in English, but there is a lot that will be impenetrable if you can’t read Chinese. Nonetheless, it’s a pleasant space to wander around and even has some interesting displays including several on feminist, homosexual and erotic Taiwanese literature, which was a nice surprise. ...... (follow the instructions below for accessing the rest of this article).
This article is featured in the app "GPSmyCity: Walks in 1K+ Cities" on iTunes App Store and Google Play. You can download the app to your mobile device to read the article offline and create a self-guided walking tour to visit the attractions featured in this article. The app turns your mobile device into a personal tour guide and it works offline, so no data plan is needed when traveling abroad.