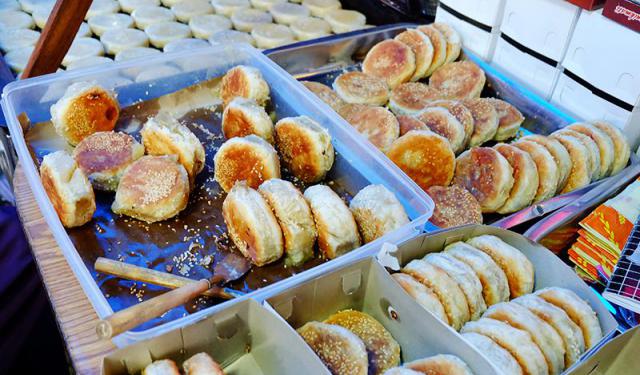 Remember about the first part of my culinary adventure in Gloria Alley in the oldest Chinatown in Jakarta, Glodok? The saga continues to the second part of the food tour, which is in Kalimati Alley.

Situated about 300 meters from Gloria Alley, Kalimati Alley is reachable on foot. Nonetheless, a newbie (like me) will have a difficulty to find one. Leaving Gloria Alley, my fellow tour members and I passed through winding streets that didn’t seem to have any single clue where it ended. Fortunately, we only only needed to follow wherever our tour guide lead us without thinking too much.

Finally, we found Santa Maria de Fatima Church, the only church with a Chinese influence architecture, and Strada Ricci School, where my mom used to study when she was a child. Then, we headed straight to the dark alley in the end of the street. I was wondering whether it was another winding path to our destination or…

Okay, so the dark alley was indeed Kalimati Alley. Assuming that Gloria Alley was already narrow and busy, it was nothing compared to Kalimati Alley. Kalimati Alley was so narrow that only a motorcycle can fit in the lane. Shophouses on both sides had canopies almost “touching” each other. As a result, the sun has a difficulty to shine our way and the alley looked dark from the distance. Nonetheless, the real temptation remained from free smells and curious appearance of the food everywhere we went. ...... (follow the instructions below for accessing the rest of this article).
This article is featured in the app "GPSmyCity: Walks in 1K+ Cities" on iTunes App Store and Google Play. You can download the app to your mobile device to read the article offline and create a self-guided walking tour to visit the attractions featured in this article. The app turns your mobile device into a personal tour guide and it works offline, so no data plan is needed when traveling abroad.