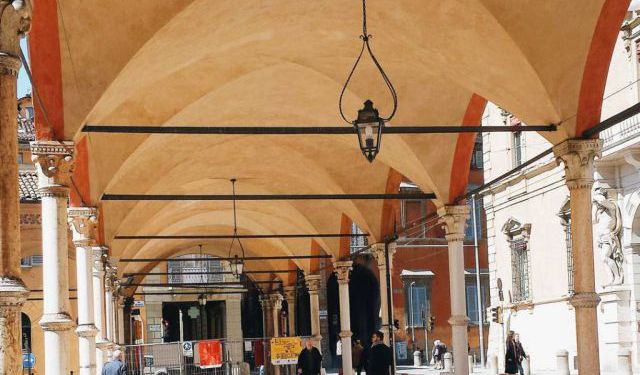 7 Secrets of Bologna, Bologna, Italy (B)

Bologna is known as a famous lively student city and I think when you are from Europe the term “Bologna Process” is also widely known. I never ever considered myself traveling to Bologna before being to Rome, Milano, Venice and Pisa… because that’s where you usually go, right? Okay, I visited Pisa earlier than Bologna, just a few days before heading there, but you got what I mean. After my visit in Bologna, all I can say is: GO THERE! Bologna is such an underrated city. What I really liked there is that it is not crowded at all, you hardly need to use public transport and visiting Bologna is just so relaxing. Besides admiring the beautiful architecture and eating your way around Bologna, you can discover its seven secrets – also something I learned during my visit. Locals say that you only really know Bologna when you discovered all the seven secrets of the city.

This secrect of Bologna sounds odd and I couldn’t believe first. I was thinking for a while how to describe it without sounding like a 15 y/o girl. Look at Neptune’s penis – yes, you read correctly, his dick is a secret. When the statue was established the catholic priests didn’t like the artist to make a big dick for Neptune because it was too obscene. So the artist followed the instructions and when you stand in front of Neptune you won’t notice anything extraordinary. Take a few steps around the statue then you will see that his thumb is placed in way that it looks like him having an erection. ...... (follow the instructions below for accessing the rest of this article).
This article is featured in the app "GPSmyCity: Walks in 1K+ Cities" on iTunes App Store and Google Play. You can download the app to your mobile device to read the article offline and create a self-guided walking tour to visit the attractions featured in this article. The app turns your mobile device into a personal tour guide and it works offline, so no data plan is needed when traveling abroad.