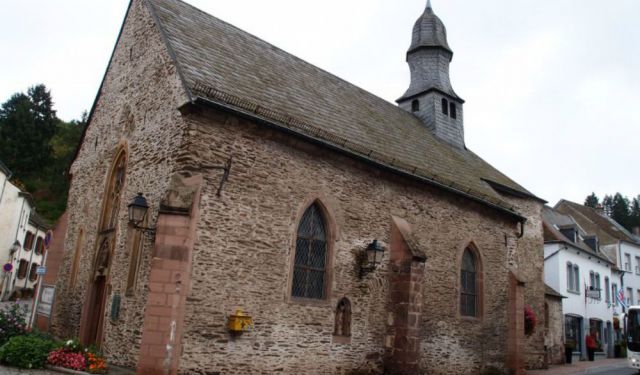 A Day Trip to Vianden – Part 1, Exploring the Town, Vianden, Luxembourg (B)

A visit to Luxembourg would not be complete without visiting a castle or two. Since my husband and I were staying in Luxembourg City, we decided to take a day trip to one of the nearby castles. We chose Vianden Castle, based on its proximity, lengthy history and natural beauty. We weren’t disappointed.

Vianden’s history stretches back for centuries. It’s original names was Viennensis, when the Gallo-Romans built a castellum (a small fort or tower) on the spot where the current castle now sits. So don’t be surprised by how old some of the buildings here look. The Church of Saint Nicholas, for example, goes all the way back to the 13th Century:

Vianden also has a claim to fame due to ties with the famous poet, Victor Hugo. He visited Vianden three times before settling here briefly after being expelled from Belgium. Some of his works and belongings can be seen here at the Victor Hugo House Literary Museum. ...... (follow the instructions below for accessing the rest of this article).
This article is featured in the app "GPSmyCity: Walks in 1K+ Cities" on iTunes App Store and Google Play. You can download the app to your mobile device to read the article offline and create a self-guided walking tour to visit the attractions featured in this article. The app turns your mobile device into a personal tour guide and it works offline, so no data plan is needed when traveling abroad.