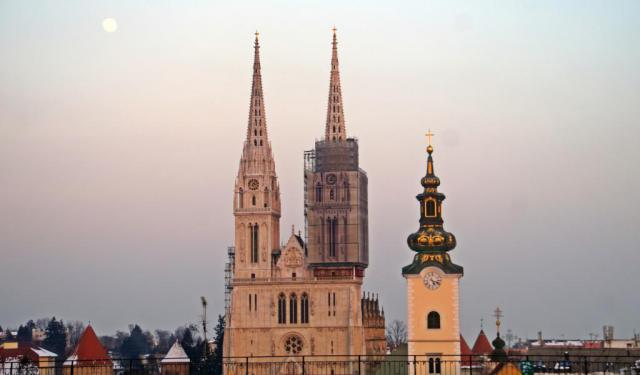 A Frosty Afternoon in Magical Zagreb, Zagreb, Croatia (B)

It’s the coldest it’s ever been, said Andrea as she was showing us to our apartment in the center of Zagreb. It was the last day of February and it was a shivering -8 degrees in Croatia. In CROATIA! A country that is known for its pristine beaches and hot summers. I never even knew they got cold winters. At the end of February, a cold front coming from Siberia had hit most of Europe. Russia and Belarus, I believe, experienced the worst cold. We had it pretty bad in Denmark as well with icy winds blowing through our capital, making my skin as red and dry as can be as I biked to uni. And as crazy as it sounds, Croatia – and Slovenia – got it as well. -8 degrees is a temperature that Croatia hasn’t experienced in over 50 years, according to Andrea. I couldn’t believe that of all days, my mum and I were there on the coldest day of the year. And we were only in Croatia for one day.

My mum and I go on a mother/daughter trip to somewhere in Europe every year for 3-4 days. This year, we had chosen Slovenia as our destination, as we really wanted to explore the quaint capital of Ljubljana and see some of the country’s beautiful lakes and caves. But flying both to and from Ljubljana from Copenhagen would mean having to cut our trip short, as the flight only leaves on certain days. Instead, we figured why not fly into Zagreb, explore that city for an afternoon and then take a morning bus to Ljubljana? After all, we had spent a week in Croatia back in 2013, but we’d never seen the capital. So that was what we decided to do. ...... (follow the instructions below for accessing the rest of this article).
This article is featured in the app "GPSmyCity: Walks in 1K+ Cities" on iTunes App Store and Google Play. You can download the app to your mobile device to read the article offline and create a self-guided walking tour to visit the attractions featured in this article. The app turns your mobile device into a personal tour guide and it works offline, so no data plan is needed when traveling abroad.