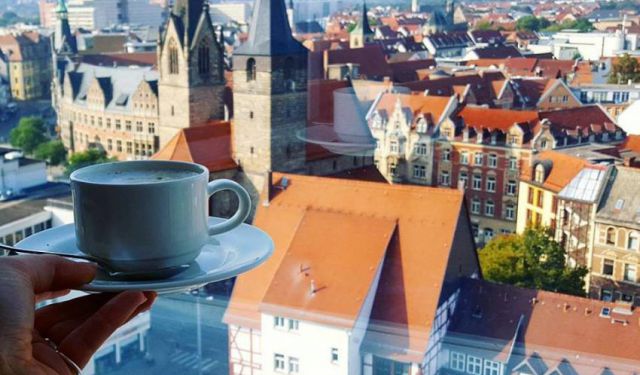 A German Adventure Part I: Erfurt, Erfurt, Germany (B)

Last week, I embarked on a press trip to the German region of Thüringen. While I’ve been traveling extensively in Germany for more than 15 years, I’ve never had the chance to visit Thüringen – and boy, have I missed out! Curious about why you simply must add Thüringen to your bucket list? Read on.

Being one of the smallest regions in Germany, Thüringen still houses some of the country’s most famous cultural cities and sights. Did you for example now that Luther studied here or that Goethe lived and wrote his most important works here? No? Maybe you knew that the first Christmas tree was erected here in the 19th century or that Marlene Dietrich lived here before she became famous? All that actually doesn’t matter now, because I’m going to show you why Thüringen is such a magical destination to put on your bucket list.

My first night in Thüringen was spent in Erfurt, which is also the capital of the region. Erfurt was one of Germany’s most important commercial towns during the Medieval Ages and so its historical value is easy to spot when strolling around in the city of a little more than 200.000 inhabitants. I definitely recommend exploring Erfurt with one of the local tour guides, who can reveal a lot of interesting facts about the city. Erfurt is home to plenty of outdoor cafés, romantic squares and even a merchant’s bridge (like the one in Venice), so it does have certain similarities with an Italian city. Erfurt also offers several interesting things on the gourmet scene and I’d like to recommend the following: ...... (follow the instructions below for accessing the rest of this article).
This article is featured in the app "GPSmyCity: Walks in 1K+ Cities" on iTunes App Store and Google Play. You can download the app to your mobile device to read the article offline and create a self-guided walking tour to visit the attractions featured in this article. The app turns your mobile device into a personal tour guide and it works offline, so no data plan is needed when traveling abroad.