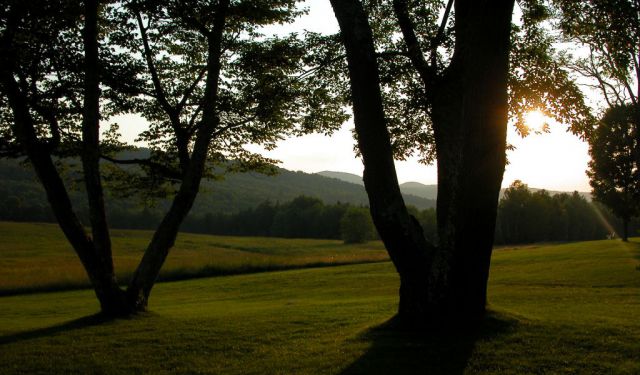 A Jug of Wine, a Loaf of Bread - and Thou, Middlebury, Vermont (B)

Theatre or theater? In Bread Loaf, Vermont, it doesn’t reallymatter, since the home of the oldest writers’ conference in America also has a sister campus in Oxford, England. (And there’s one in Santa Fe, New Mexico). But, as you can well imagine, this is not the term that attracts the most attention from visitors but rather, the unique and lovable name of the mountain that looms on the horizon.

The tremendously expansive grounds of the Bread Loaf School of English owe their origins to the purchase and subsequent endowment of about 30,000 acres of forest and farmland in 1915 by Joseph Battell to Middlebury College. This makes for a lot of green fields dotted with bright, mustard-coloured edifices throughout the campus.

The first writer’s conference was held in 1926 at the urging of poet Robert Frost and novelist Willa Cather, among others, who found the surroundings inspiring. Since then, it has drawn hundreds of famous and almost famous attendees to the intensive workshop that takes place during the month of August. ...... (follow the instructions below for accessing the rest of this article).
This article is featured in the app "GPSmyCity: Walks in 1K+ Cities" on iTunes App Store and Google Play. You can download the app to your mobile device to read the article offline and create a self-guided walking tour to visit the attractions featured in this article. The app turns your mobile device into a personal tour guide and it works offline, so no data plan is needed when traveling abroad.