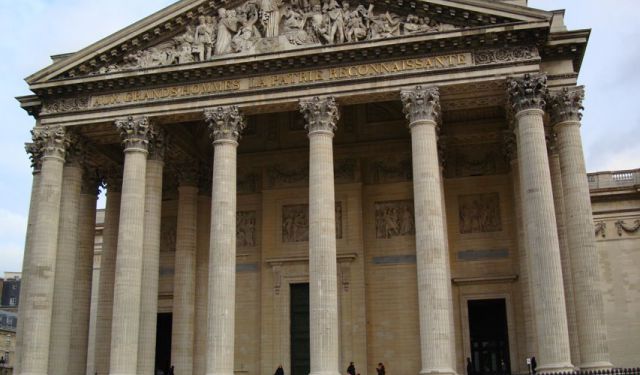 Quartier Latin--- the name alone evokes images of bohemian Paris at its height. In spite of its indisputable gentrification and the loss of its former identity, the myriad streets surrounding what was the left bank's true student and intellectual center continues to attract tourists and Parisians who hope to discover, or possibly resurrect, a little of that electric sense of change we read of in Camus, Sartre and Beckett.

The heart of St. Michel is still the Place St. Michel (Metro St. Michel) with its baroque fountain of St. Michel killing a demon of some sort. This was once the site of numerous protests and social uprisings. One of the main events of French resistance to the occupying Nazis took place in the square, and in the now legendary riots of 1968, students took charge of the square in the face of tear gas and police clubs, declaring it an independent state! Odd as this may sound, it led workers to rally the same cause by announcing mass strikes, which led to the eventual fall of De Gaulle's government. This was once the "Washington Square Park" of Paris, filled with hippies, artists, writers, poets, dancers, musicians and art students. Now you are more likely to see the "Des Moines Bingo Club" on tour, en masse, zipped up in North Face and Gore-Tex as they climb the harrowing length of St. Michel in the extreme conditions of an late spring chill. ...... (follow the instructions below for accessing the rest of this article).
This article is featured in the app "GPSmyCity: Walks in 1K+ Cities" on iTunes App Store and Google Play. You can download the app to your mobile device to read the article offline and create a self-guided walking tour to visit the attractions featured in this article. The app turns your mobile device into a personal tour guide and it works offline, so no data plan is needed when traveling abroad.