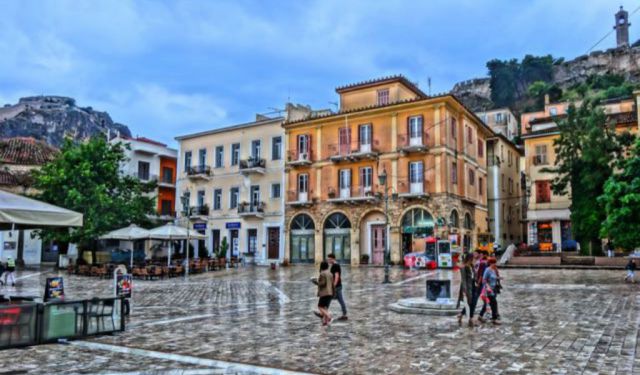 A Visit to Nafplion, Nafplio, Greece (B)

Driving into Nafplio several years ago my first impression was that this can't be the place. I read that Nafplio was a charming city with a spectacular waterfront, small streets and historic buildings crowned by a fortress that looks over another fort in the middle of the harbor. But driving into Nafplio is like entering a suburb of Athens, with congested traffic, apartment buildings and a feeling of disorder as if the city was not planned but allowed to spring up wherever anyone wanted to place a building. There was chaotic traffic like you would find in Athens and I wondered if I had not slipped into a worm-hole and been magically transported, car and all back to Greece's current capital from Greece's first capital. Why would so many Athenians spend their weekends here? Because it reminded them of Athens?

Ok. To be totally honest I was not in the best of moods. I had driven down from Pelion on back roads, cutting across the Gulf of Corinth on a small ferry that went back and forth between Agios Nikolaos and Egion, and then driven the coastal road that hugs the northern shores of the Peloponessos through the rush hour traffic of Corinth, in a great little Honda Civic that my friend Elias at Swift Car rental had given me because some other tourist had totaled the brand new Hyundai Accent I should have been driving. The Honda was a good car, in fact it saved my life a couple times along the way by responding when I had to get out of a tight situation, once on the National Road (near head on collision with a cement-mixer) and another in Evia (almost rear ended by a truck full of goats). But as quick and maneuverable as the Honda was, it lacked a critical element for me and my less tolerant family. It had no air-conditioning and this was the middle of a heat wave in Argos, one of the hottest regions in Greece. The only relief was the movement of the hot air through the open windows, though this had to be fought for since my family (my wife and daughter) would rather sweat than have their hair messed with by hot wind. A swim and late lunch east of Egion helped us gather our strength and enabled us to continue all the way to Nafplio, arriving at sunset, but this first glimpse of the city did not make me want to spend any more time then it took to find an air-conditioned hotel with satellite television. With my handy Greece-Travel-Phone I called Kostas at Dolphin Hellas Travel and before we reached the city he called back to tell us we were booked at the ...... (follow the instructions below for accessing the rest of this article).
This article is featured in the app "GPSmyCity: Walks in 1K+ Cities" on iTunes App Store and Google Play. You can download the app to your mobile device to read the article offline and create a self-guided walking tour to visit the attractions featured in this article. The app turns your mobile device into a personal tour guide and it works offline, so no data plan is needed when traveling abroad.