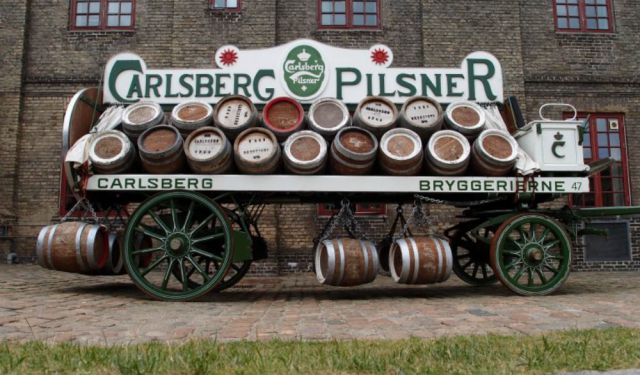 I’ll be honest right up front – Carlsberg wasn’t a beer brand I ever gave much thought to. If you’d asked me to name five big beer companies, Carlsberg wouldn’t have even been a consideration. But that all changed after my husband and I toured the Carlsberg Brewery in Copenhagen, Denmark. Just the entrance alone told us this was going to be an interesting experience:

A man named J. C. Jacobsen founded Carlsberg in 1847, after studying brewing in Bavaria. He named the brewery after his son, Carl, and the Danish word for hill, “bjerg”. But it wasn’t all smooth sailing for Mr. Jacobsen and his company.

In 1867, a massive fire damaged much of the brewery. But instead of letting this accident ruin his business, Mr. Jacobsen used it as an opportunity. He had the brewery rebuilt using steel girders and I-beams in an attempt to make it fireproof. He also modernized the cooling system which improved the quality of the beer.

Mr. Jacobsen took brewing to a whole new level. In 1875 he founded the Carlsberg Laboratory to study the malting, fermenting and brewing processes. One of the great conundrums of brewing at the time was the difficulty in obtaining fresh yeast. Beer, therefore was often contaminated. This problem was solved at the Carlsberg labs in 1883 by professor Emil Christian Hansen. He discovered that yeast culture could be cultivated, which allowed him to produce a pure strain of brewer’s yeast. This discovery could have made Mr. Jacobsen a very wealthy man. But instead of selling the secret, he gave the information away to brewmasters around the world. Pretty remarkable. I suppose he felt a kinship with other brewers and figured their craft benefited more from sharing information than by hoarding it. Though, sometimes a little “magical” intervention couldn’t hurt either: ...... (follow the instructions below for accessing the rest of this article).
This article is featured in the app "GPSmyCity: Walks in 1K+ Cities" on iTunes App Store and Google Play. You can download the app to your mobile device to read the article offline and create a self-guided walking tour to visit the attractions featured in this article. The app turns your mobile device into a personal tour guide and it works offline, so no data plan is needed when traveling abroad.