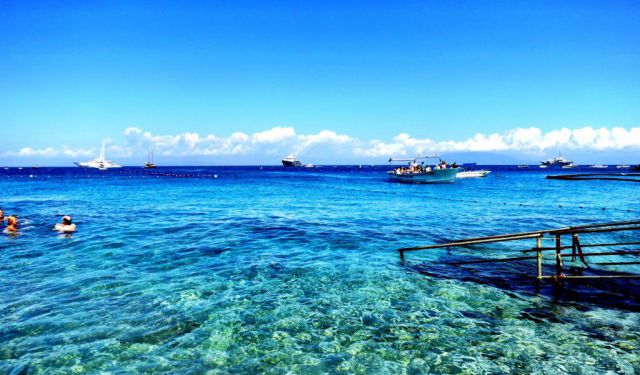 A Weekend in Capri, Capri, Italy (B)

Capri is an island in the Bay of Naples, close to Sorrento and the Amalfi Coast, that has always been synonymous with beauty, stars, style and impossible glamour. The island is comprised of three main areas: Marina Grande, Capri and Anacapri. The Marina Grande is the main port of the island with easy access to the hydrofoils and near the funicular railway. The town of Capri is the island’s main population center with its designer shops, nightclubs and the famous Piazzetta. Anacapri is situated high up on the slopes of Mount Solaro and is much quieter (and less crowded) than Capri.

April, May, September and October are the best months to visit Capri due to the gorgeous weather (warm enough to swim but not unbearably hot) and significantly lower hotel rates. The summer months of June through August are the busiest of the year. August registers the greatest number of tourists on the island, with an average of 20,000 arrivals per day to the 10 square km island…avoid August at all costs. ...... (follow the instructions below for accessing the rest of this article).
This article is featured in the app "GPSmyCity: Walks in 1K+ Cities" on iTunes App Store and Google Play. You can download the app to your mobile device to read the article offline and create a self-guided walking tour to visit the attractions featured in this article. The app turns your mobile device into a personal tour guide and it works offline, so no data plan is needed when traveling abroad.