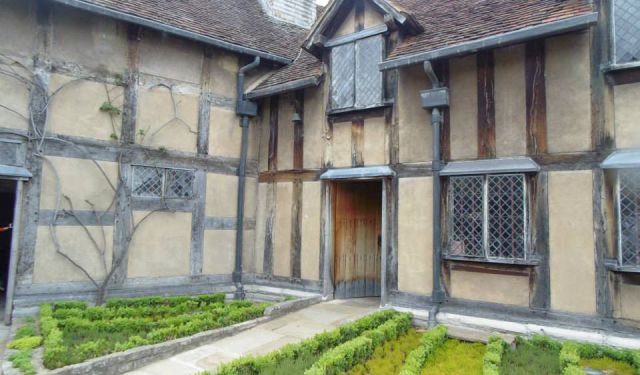 A Weekend Wander to Shakespeare Country, England, Stratford-upon-Avon, England (B)

William Shakespeare, is probably the World’s most famous Poet and Play writer, so famous in fact, he has a country named after him.

South of Birmingham, North of Oxford, and nestled beside the Cotswolds is an area colloquially known as Shakespeare Country. It is not a country in its own right, but its name derives from the fact that Stratford-Upon-Avon is the birthplace of the English Poet.

The town attracts approximately 4.9 million visitors per year, and I decided to add to the statistic. Having been to Stratford-Upon-Avon once in the past, but not remembering much, I wanted to enlighten myself with history and culture for the weekend.

Travelling to Stratford-Upon-Avon by rail is the quickest, and possibly easiest way to do so. I travelled from Stafford in the West Midlands, and it took 2.5 hours (owing to the rail works on a public holiday), but it would normally take 1.5 hours. From Birmingham trains can reach Stratford in 45-55 minutes. If you are coming from London, it will take a lot longer; 2-3 hours, but it is worth it. ...... (follow the instructions below for accessing the rest of this article).
This article is featured in the app "GPSmyCity: Walks in 1K+ Cities" on iTunes App Store and Google Play. You can download the app to your mobile device to read the article offline and create a self-guided walking tour to visit the attractions featured in this article. The app turns your mobile device into a personal tour guide and it works offline, so no data plan is needed when traveling abroad.