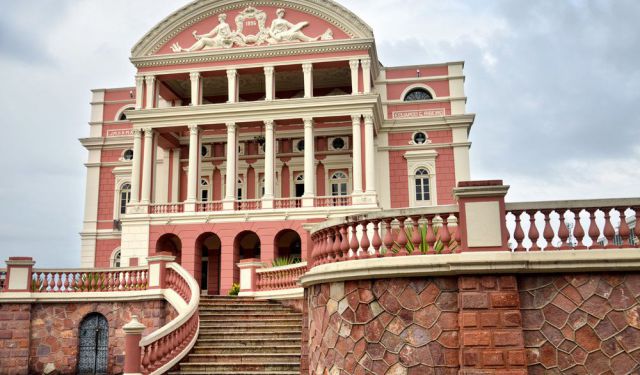 Adventure in the Amazon, Brazil - the City of Manaus, Manaus, Brazil (B)

The Amazon region is mainly known for adventurous tours exploring the wildlife, jungle treks and river boat/canoe trips. Literally nobody would come here to enjoy the city life. However, the capital of the Amazonas state in Brazil, although located right in the middle of the world's largest rain forest, is a real metropolis with over 2 million inhabitants. The city is basically isolated from the rest of the country which preserves the original culture of the native tribes and gives it the unique touch. And, of course it is the starting point and gateway to the rest of the truly exciting area of the Amazon in Brazil.

As I mentioned in the first part of the Amazon series - the only way to get to Manaus is either by boat or airplane. The roads basically don't exist - which makes Manaus the most isolated city in Brazil. There are many flights from the major cities all over the country. However, when you land in Manaus - you will surely not feel any difference - it looks like any other big city. ...... (follow the instructions below for accessing the rest of this article).
This article is featured in the app "GPSmyCity: Walks in 1K+ Cities" on iTunes App Store and Google Play. You can download the app to your mobile device to read the article offline and create a self-guided walking tour to visit the attractions featured in this article. The app turns your mobile device into a personal tour guide and it works offline, so no data plan is needed when traveling abroad.