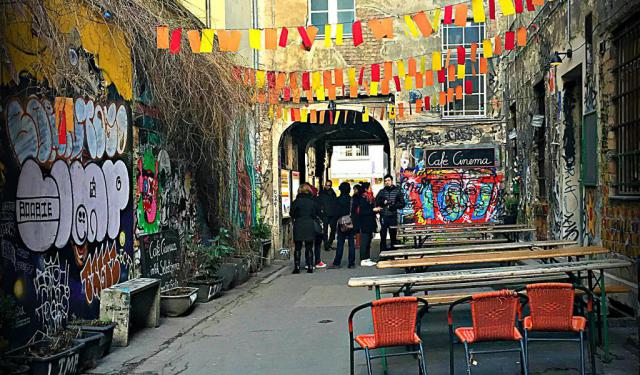 This winter, I went to Berlin for the first time. In my mind, Berlin was a city divided into two with a straight line, thus creating two different worlds. But when i walked around the city for the first time, I understood that the thing that create todays Berlin was not that wall but what happened after the wall collapsed.

Think about a city, that suddenly became so free that everybody has found a place where they can express themselves without any boundaries. And even though they didn't have much money, that didn't limit their creativity. So as a result of that freedom, now everywhere, every corner, every shop and even street signs are full of surprises. Thats exactly why they called Berlin "Poor but Sexy"

So I decided to attend alternative Berlin tour in order to get to know this side of the "Poor but Sexy" better and by far that was the best time i spent in the city. For the tour stops, please keep on reading...

First stop of the tour was Tacheles. Tacheles means to speak directly and honestly in Yiddish. This building is a product a squatting movement that widespreadly happened after the Berlin wall came down. Building was used as a prison by Nazi Regime and right after the wall came down it turned into a a non profit art house consisting of workshops, cinema, theater, garden, cafes and a nightclub. ...... (follow the instructions below for accessing the rest of this article).
This article is featured in the app "GPSmyCity: Walks in 1K+ Cities" on iTunes App Store and Google Play. You can download the app to your mobile device to read the article offline and create a self-guided walking tour to visit the attractions featured in this article. The app turns your mobile device into a personal tour guide and it works offline, so no data plan is needed when traveling abroad.