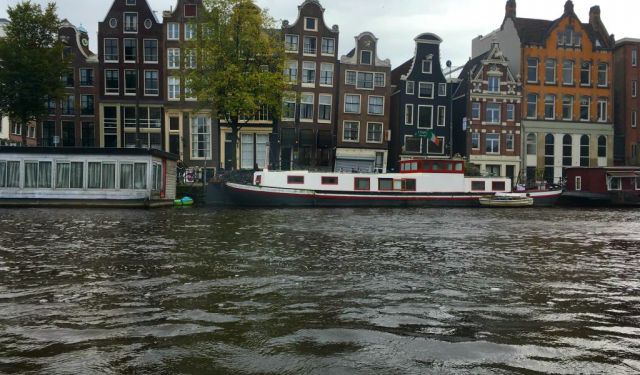 Amsterdam From the Water, Amsterdam, Netherlands (B)

Hey! So I think my last post made it pretty clear that I saw the Rolling Stones, and saw them I did. So although the holiday was primarily for and focused on the Stones, we did have a spare couple of days to explore and see what the city of Amsterdam had to offer.

One thing my Grandpap said we had to do was a canal tour. He visits Amsterdam regularly and told us that it really is a different way of seeing the city. So after grabbing the tickets outside central station, roughly €16 euros a piece later, we were off to find the boat. We chose the tour with Stromma as it was a 1-hour highlights tour. It departed every 15 minutes and offered audio guides in 19 languages. We actually didn’t make the first boat that was there- knowing they were every 15 minutes, we held back to be sure we got window seats. Also like most tours, the headphones are provided so not to worry if you don’t have your own.

All that means is that the canal ring has a special/cultural significance- namely that it demonstrates so called town planning of the 17th century that went on to influence the world to this day. ...... (follow the instructions below for accessing the rest of this article).
This article is featured in the app "GPSmyCity: Walks in 1K+ Cities" on iTunes App Store and Google Play. You can download the app to your mobile device to read the article offline and create a self-guided walking tour to visit the attractions featured in this article. The app turns your mobile device into a personal tour guide and it works offline, so no data plan is needed when traveling abroad.