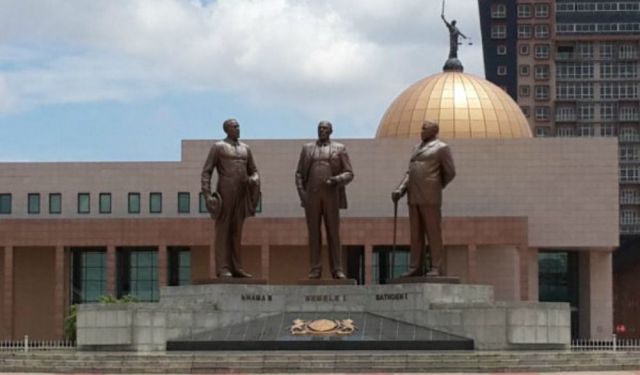 I’d never been to Botswana before. Neither had I crossed a South African border by road before. The Madikwe Game Reserve was next to the Botswana border so it made sense to pay a short visit to Gaborone while I was in the vicinity. I would have loved to visit Chobe and the Okavango Delta but they were way too far for a drive -about 12 hours away. So we settled on Gaborone. Everyone I spoke to who’d been there had told me there was “nothing” there but I still had to go see for myself. And to tick Botswana off my list of countries visited, of course.

So we crossed the border at Tlokweng and entered Gaborone. I was surprised at how rural it was. Cows and goats and sometimes donkeys, grazing on the side of the road. No skyscrapers found in most capital cities. So, I had to take photos of every slightly tall building I saw, which wasn’t many.

We checked in at our hotel, the Gaborone Sun. I had been told by Sun International Central Reservations that they were fully booked but on contacting the hotel directly, I was told otherwise and managed to get a room. The hotel had free wi-fi , a swimming pool, gym, tennis and squash courts and was adjacent to a golf course where hotel residents were entitled to a complimentary game. It was comfortable and the kids had fun in the pool which was great as they couldn’t have fun anywhere else in Gaborone. We spent the first afternoon at the hotel. ...... (follow the instructions below for accessing the rest of this article).
This article is featured in the app "GPSmyCity: Walks in 1K+ Cities" on iTunes App Store and Google Play. You can download the app to your mobile device to read the article offline and create a self-guided walking tour to visit the attractions featured in this article. The app turns your mobile device into a personal tour guide and it works offline, so no data plan is needed when traveling abroad.