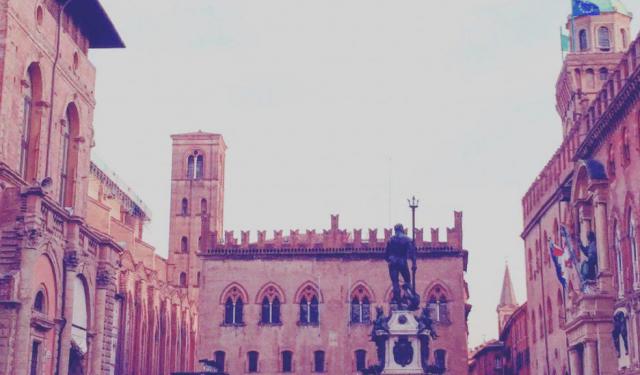 Bologna is certainly not as popular as its rival Italian cities but this is no reason to overlook this hidden gem. This lively, relaxed city is a bustling hub for students and budget travellers.

Known for its medieval streets and towers, quirky cafes, amazing culinary and the home to worlds oldest university. Bologna should be on everyones Italian itinerary.

Bologna airport has great connections to many destinations in Europe and even North Africa. The price of flights are great too. It only cost me £16 from London.

From the airport, the bus to the centre is pretty regular, you need to get the BLQ bus and it’s 6€ for a ticket from the machine at the stop or there is another one inside the terminal.

Pisa who? Did you know that Bologna is the home to two leaning towers. The tallest one is in fact the tallest leaning tower in the world standing at a magnificent 97.2m high. It is open to the public at the small price of 3€ and offers fantastic views of the city.

The porticoes are pretty archways that line the city buildings. Perfect shelter from the sun and the rain. There are reportedly 666 archways in Bologna and today has rightly deserved the title as one of Italy’s many UNESCO sights. ...... (follow the instructions below for accessing the rest of this article).
This article is featured in the app "GPSmyCity: Walks in 1K+ Cities" on iTunes App Store and Google Play. You can download the app to your mobile device to read the article offline and create a self-guided walking tour to visit the attractions featured in this article. The app turns your mobile device into a personal tour guide and it works offline, so no data plan is needed when traveling abroad.