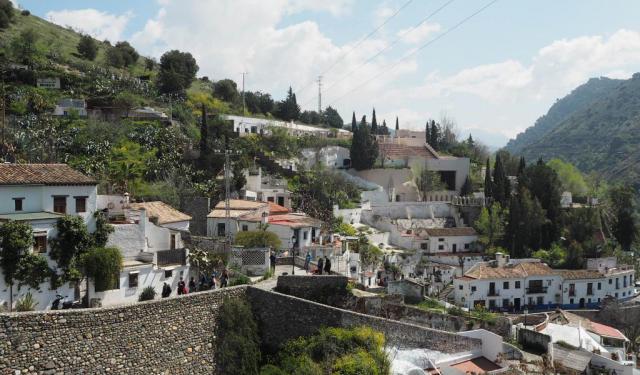 Granada is one of the most beautiful cities in Spain (in my opinion). Surrounded by the magnificent Sierre Nevada mountain range, the city offers so much to do for everyone. Rich in culture from traditional to modern. You simply cannot go to Spain and not take a trip to this marvellous city.

Traditional architecture, markets, tapas, mountains, caves, and of course the Alhambra all there ready to be explored. After exploring Granada throughout my time in Spain I have finally devised this essential guide to Granada, Spain.

Granada has a small airport, operating flights from Madrid and weekly ones from London. Another option is to fly into Malaga and take the direct bus from the airport that leaves every hour. It takes around 2 hours and is most peoples preferred way to get to Granada.

The Alhambra– Probably considered to be the No.1 attraction in Granada. Built in the 1200s and 1300s during the final centuries of the Muslim control of Andalucia. Standing tall with pride over the city as if it is protecting it somehow. Words cannot describe the beauty of this place. ...... (follow the instructions below for accessing the rest of this article).
This article is featured in the app "GPSmyCity: Walks in 1K+ Cities" on iTunes App Store and Google Play. You can download the app to your mobile device to read the article offline and create a self-guided walking tour to visit the attractions featured in this article. The app turns your mobile device into a personal tour guide and it works offline, so no data plan is needed when traveling abroad.