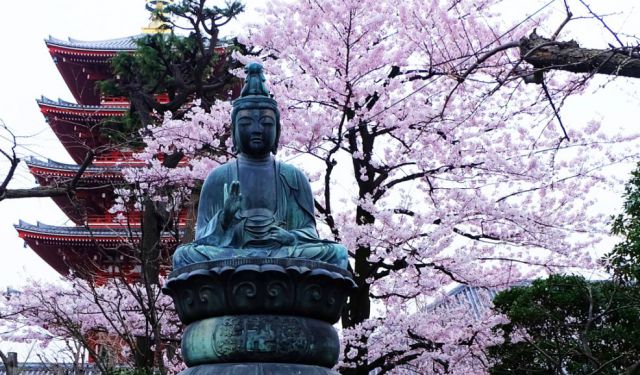 Asakusa in Pictures: Outside Sensoji Temple after 5 PM, Tokyo, Japan (B)

Situated in Taito, Asakusa was an entertainment district from Edo Period until about 1945 when the are was heavily damaged because of the bombings in the end of World War II. The Buddhist Temple dedicated to Bodhisattva Kannon, or Goddess of Mercy, built in 628 and the landmark of Asakusa, Sensoji Temple, was successfully restored after the war and has regained its old glory ever since. Nonetheless, the rest of the rebuilt area has lost its popularity for being an entertainment district.

But it’s not a bad sign at all. Instead, if you are looking for concentrated traditional elements in the middle of Tokyo, Asakusa is the perfect destination because most buildings aged older than 50 years gather in the area. I admit, it’s my favourite district in Tokyo.

So, what’s up with 5 pm? 5 pm is the closing time of Sensoji Temple. When punctuality in Japan is indisputable, the giant gates started to block floods of people who struggle to get in in the last minute. My friend ran as fast as she could to reach the stairs to the temple until spine ankle problem struck her, but still didn’t make it. Me neither, especially I was a few meters behind her. I’ll give you some hints on how to visit Asakusa in the last minute in the end of this post. ...... (follow the instructions below for accessing the rest of this article).
This article is featured in the app "GPSmyCity: Walks in 1K+ Cities" on iTunes App Store and Google Play. You can download the app to your mobile device to read the article offline and create a self-guided walking tour to visit the attractions featured in this article. The app turns your mobile device into a personal tour guide and it works offline, so no data plan is needed when traveling abroad.