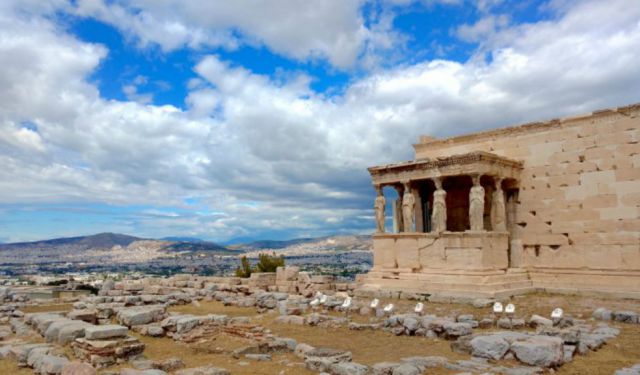 Athens. One of the world’s oldest cities and the supposed birthplace of western civilisation. The history of this city is beyond summary in this infinitesimal blog, so I won’t even try. Let’s just say that its history, culture and people are all fierce, proud, and wonderful. We all know of Athens but do yourself a favour and spend some time on the Wikipedia page for the city, it’s well worth your time.

We were there for three nights, excited to be in a big city after two weeks of island life. As soon as we arrived we found a city with a wild beating heart; graffiti absolutely everywhere, city smells, food, people and music. We found a modern, trendy city with an inspired youth. Athens was going to be fun.

We arrived via ferry from Milos. Originally we had booked passage with Hellenic Seaways, but they cancelled the service seven days earlier. We had re-booked with Seajets, but they cancelled their service two hours before departure due to high winds. Fortunately for us we had a fantastic host, who bundled us in a car and down the port to get refunds on our Seajet tickets, and to purchase tickets on a larger ship departing at 2pm. We got two tickets for €32.50 (€72.50 cheaper than our original booking), but only to Kynthos; the final stop before Piraeus (Athens), as tickets for the whole journey were sold out. Our host advised us to find a quiet corner and “just not get off” until Athens, which worked ok, although our names were getting called out over the P.A since we failed to disembark. He didn’t tell us however that the journey would take 8.5 hours. It all worked out in the end, we got to Athens tired but without a fine, and €72.50 richer. Sorry whatever ship that was. ...... (follow the instructions below for accessing the rest of this article).
This article is featured in the app "GPSmyCity: Walks in 1K+ Cities" on iTunes App Store and Google Play. You can download the app to your mobile device to read the article offline and create a self-guided walking tour to visit the attractions featured in this article. The app turns your mobile device into a personal tour guide and it works offline, so no data plan is needed when traveling abroad.