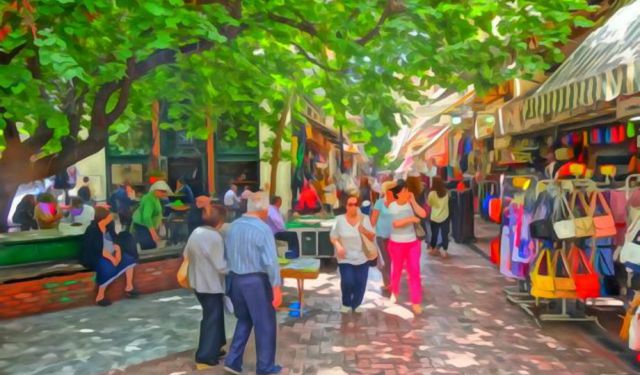 My favorite street in Athens is the one that runs from Omonia Square to Monastiraki Square called Athinas Street. If you walk a straight line down Athinas from Omonia it will take you right up to the Acropolis and on the way you would pass some of the most interesting places in Athens. Athinas street for me is the heart and soul of modern Athens and I can sit here in front of my computer in North Carolina and give a guided tour as easily as I could give a tour of my own house. I spend several weeks a year staying on Athinas Street, usually at the Hotel Attalos and if I could find an affordable apartment in the neighborhood I would buy it because nothing makes me feel more alive than to walk out the front door of the hotel and be engulfed in the sites, sounds and people of the most diverse street in Athens.

If you see the center of Athens as the Acropolis, then the beginning of Athinas street is at Monastiraki Square where the tables of Mparaktaris old taverna envelope the small church for which the area is named. Ermou Street, the primary clothes shopping street in Athens, comes down from Syntagma Square and passes Athinas street on its way to Keramikos and the Gazi, Athens newest center of nighttime activity. But for me Psiri is still the place to be. The southeast corner of the Psiri neighborhood is the corner of Athinas Street and Ermou right where the entrance to the new metro station and the neo-classic restored building on the corner, and the Hotel A is for Athens with its cafe and spectacular view of the square and the Acropolis. A couple streets down Ermou is Ag Theklas Street, home to Lord Byron's Maid of Athens and the shop of Melissinos, the Poet-Sandal-Maker whose family has been making sandals and shoes for generations. ...... (follow the instructions below for accessing the rest of this article).
This article is featured in the app "GPSmyCity: Walks in 1K+ Cities" on iTunes App Store and Google Play. You can download the app to your mobile device to read the article offline and create a self-guided walking tour to visit the attractions featured in this article. The app turns your mobile device into a personal tour guide and it works offline, so no data plan is needed when traveling abroad.