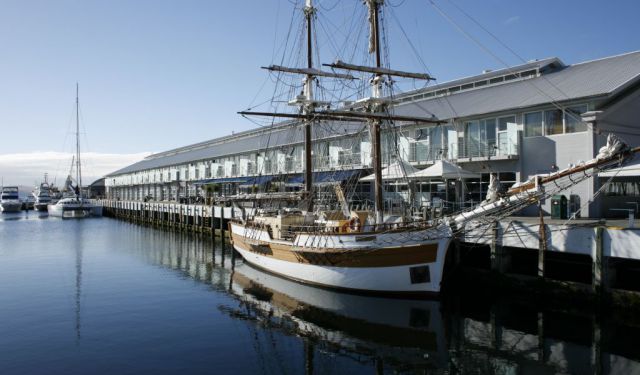 Hobart is a popular city break in Australia and this Hobart city guide will give you all the information you need to plan a great trip to the Tasmanian capital.

This beautiful harbourside city has a historic centre that combines with pretty residential suburbs stretching around the arms of the Derwent River on its way to join the Tasman Sea. Behind the city, majestic Mt Wellington provides a craggy backdrop, often with a tablecloth of low cloud.

Founded in 1804, Hobart’s early history is connected with the establishment of a convict colony by the British in what was initially called Van Diemen’s Land. A number of penal settlements were established and vie with anything on the mainland in their reputation for cruelty. The thousands of convict labourers transported from Britain were responsible for the construction of Hobart’s architecture, from roughly-dressed golden stone.

Hobart is also a good starting point for exploring the state of Tasmania, an island off the south coast of mainland Australia with an area of less than 70,000 kilometres and a population of only half a million people. The small size of this state makes it easy to explore and Tasmania offers a pleasing contrast of landscape and climate to the mainland. ...... (follow the instructions below for accessing the rest of this article).
This article is featured in the app "GPSmyCity: Walks in 1K+ Cities" on iTunes App Store and Google Play. You can download the app to your mobile device to read the article offline and create a self-guided walking tour to visit the attractions featured in this article. The app turns your mobile device into a personal tour guide and it works offline, so no data plan is needed when traveling abroad.