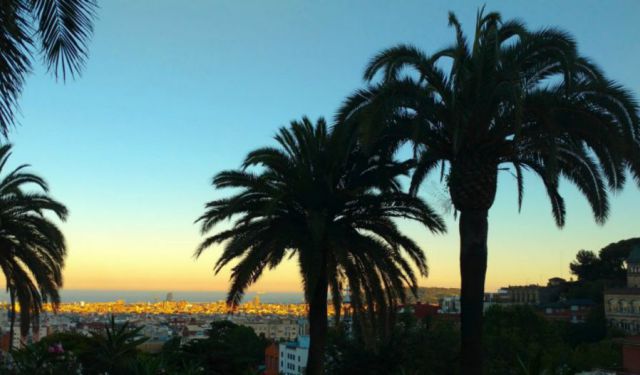 Spain makes me so happy. The weather, culture, people and food are beautiful and Barcelona is the city that has it all.

The largest city on the Mediterranean and one of the most important centres in Europe, Barcelona has evolved in to a tourist mecca with over five million visitors per year. Captivating architecture dominates the tourist itinerary, with numerous Antoni Gaudí designed structures being the primary attraction alongside the gothic quarter. Barcelona has just about everything you would expect to find in a big European city; great nightlife, amazing food and adventure in abundance, but in Barcelona there’s also a good beach and even better weather.

We were in town for our first stop (and my first time) in Spain, and Barcelona lived up to the hype.

We arrived to Barcelona from a tiny village called Montpeyroux in France. From Montpeyroux we hitchhiked to nearby Gignac, where we caught a bus to Montpellier for €1.50 each. From Montpellier we had booked a ride-share with BlaBlaCar to Barcelona, which took about four hours including stops and cost €30 each. Ride-sharing is a great way to get around Spain, it’s very common and usually cheaper than both train and bus. Because ride-sharing is so available you might not have a lot of luck hitchhiking in Spain. ...... (follow the instructions below for accessing the rest of this article).
This article is featured in the app "GPSmyCity: Walks in 1K+ Cities" on iTunes App Store and Google Play. You can download the app to your mobile device to read the article offline and create a self-guided walking tour to visit the attractions featured in this article. The app turns your mobile device into a personal tour guide and it works offline, so no data plan is needed when traveling abroad.