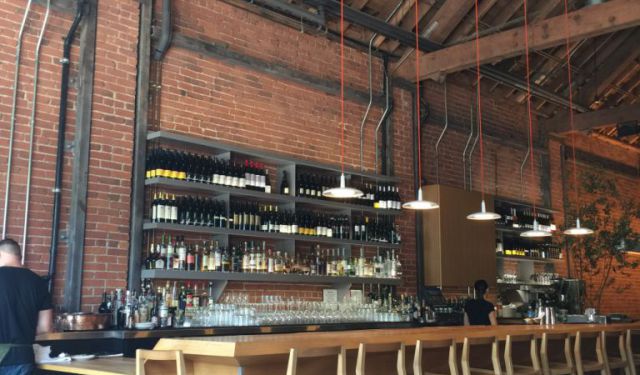 I regret I never dined at Hatfield’s that occupied the former Michel Richard restaurant Citrus on Melrose Ave. Fortunately the dynamic culinary couple, Karen and Quinn Hatfield, who met when they worked at Spago, quickly opened a more fast-casual cafe nearby in 2012, Sycamore Kitchen.

Ody + Penelope’s shrimp and grits is a twist on the New Orleans favorite. Riced cauliflower offers a similar texture yet healthier alternative to grits, with three succulent, sweet shrimp on top.

Located inside a former iconic print shop along the design corridor of District La Brea, they transformed the space into an urban bakery-eatery with an appealing front dining patio. Karen makes her delicious pastries (try the salted caramel pecan babka) and breads for breakfast, and Quinn helps with the sandwiches and salads for lunch. It became a local and social-media favorite known for their Croque Madame and cinnamon brioche French toast with crème fraiche and fruit slaw.

When an empty storefront with Greek-style columns became available a few doors down, the Hatfield’s were ready to tackle evenings again and open a dinner destination. In January, they opened Odys + Penelope, named after Odysseus and Penelope of Homer’s Greek epic “The Odyssey.” ...... (follow the instructions below for accessing the rest of this article).
This article is featured in the app "GPSmyCity: Walks in 1K+ Cities" on iTunes App Store and Google Play. You can download the app to your mobile device to read the article offline and create a self-guided walking tour to visit the attractions featured in this article. The app turns your mobile device into a personal tour guide and it works offline, so no data plan is needed when traveling abroad.