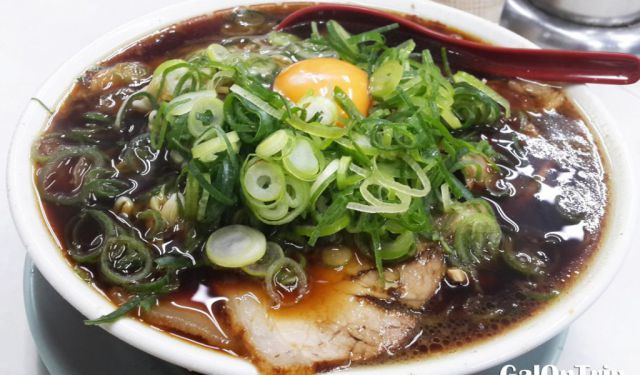 Suppose you read the first part of this post, you will find out that we came to this ramenshop by mistake. In brief, we were initially advised to go to Honke Daiichiasahi. Nonetheless, since none of us could read Japanese, we didn’t realize that the store where we queued up, the one with a red canopy, was Shinpuku Saikan. On the other hand, Honke Daiichiasahi had a yellow canopy, according to the image shown on Google Map.

Despite the wrong line, we decided to stick to it because the queue at Honke Daiichiasahi was unbearable to wait with an empty stomach.

On that day, the last order was at 10.30 pm. So at 10.15 pm, we were the last guests to be in line. The waiter passed their menu to us and everyone else queuing up outside the outlet. About 20 minutes later, we officially entered the eatery. Even so, our patience was once again put to the test when we still had to stand until the existing guests left their seats.

Established in 1938, it is claimed to be the original style of Kyoto ramen. Its neighbour and rival, Honke Daiichiasahi, on the other hand, was opened about 15 years later. The dining room had a minimalist and clean-cut style, dominated with white-tiled wall surrounding that gave an impression of nothing flashy and pretentious about this eatery. The white atmosphere was also reflected at the bar section, including the menu list on top of it printed on white background. There was no particular decoration to beautify the interior except “basic necessities”, such as calendar and clock. ...... (follow the instructions below for accessing the rest of this article).
This article is featured in the app "GPSmyCity: Walks in 1K+ Cities" on iTunes App Store and Google Play. You can download the app to your mobile device to read the article offline and create a self-guided walking tour to visit the attractions featured in this article. The app turns your mobile device into a personal tour guide and it works offline, so no data plan is needed when traveling abroad.