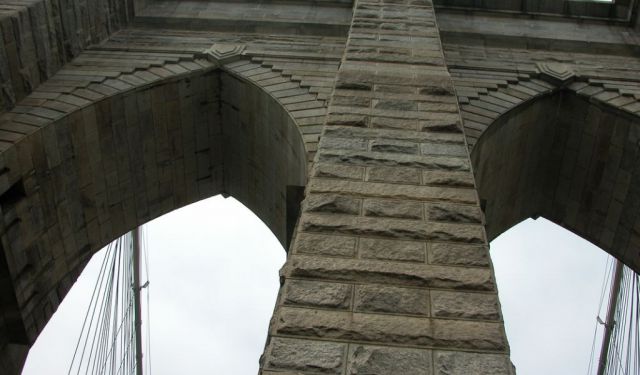 The history of bridge building in the world has always been characterized by the quest for better design and strength. The Brooklyn Bridge in New York City, opened in 1883, was the first suspension bridge to use steel wire cables instead of iron. Sailors accustomed to high rigging were hired to string the 1,500 suspenders for the deck.

The risk above the bridge was matched by the danger below. To build the two giant stone towers, timber caissons were sunk deep into the riverbed and filled with concrete by crews of men in air-locked dungeons. Digging until they reached bedrock, some of the workers (dubbed “sand hogs”) were ultimately afflicted by decompression sickness, the same hazard risked by deep-water divers when rising to the surface too quickly. The condition disabled Brooklyn’s engineer, Washington A. Roebling, resulting in the completion of the work by proxy through his wife Emily, also a trained engineer. All told, at least 20 people lost their lives in the 14 years it took to build the Brooklyn Bridge. ...... (follow the instructions below for accessing the rest of this article).
This article is featured in the app "GPSmyCity: Walks in 1K+ Cities" on iTunes App Store and Google Play. You can download the app to your mobile device to read the article offline and create a self-guided walking tour to visit the attractions featured in this article. The app turns your mobile device into a personal tour guide and it works offline, so no data plan is needed when traveling abroad.