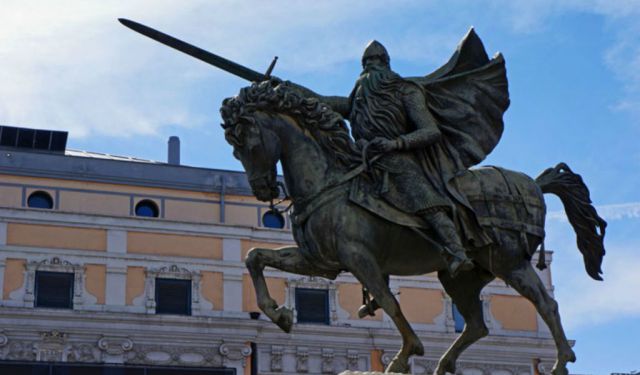 Walking into Burgos after Atapuerca, you’ll pass through enough change that you’ll wonder, “Where am I going??”: military zone, giant wooded cross, rings of stone, airport, railway tracks, and then a 10km long industrial zone. Yes, this is the infamous Camino Frances industrial zone and you have three options: take a vaguely marked detour near the airport, take the bus once in the zone itself, or just trudge along. I did the third – I’m stubborn that way.

I wanted to walk the whole Camino Frances, the good and the bad. Though this was one of the few times I did use my iPod. The walk was not awful but it wasn’t pleasant either. Lots of factories, weird buildings, and no pilgrims. And my feet were not too happy about the unrelenting trudge against the pavement. But that actually wasn’t the worst part. That honour goes to the Camino signage in the city (or the lack thereof). Arrows and shells were either hard to find, too discreet, and/or awkwardly placed. I had to break out the Brierley book several times to use the map rather than rely on the seemingly non-existent markings – it really was like playing Where’s Waldo. And once in the old city, if you’re going to the Municipal Albergue near the Cathedral, don’t bother following the street signs boasting its name. Just use the map. I know I wasn’t the only one who seemingly circled the Cathedral several times looking for this albergue… ...... (follow the instructions below for accessing the rest of this article).
This article is featured in the app "GPSmyCity: Walks in 1K+ Cities" on iTunes App Store and Google Play. You can download the app to your mobile device to read the article offline and create a self-guided walking tour to visit the attractions featured in this article. The app turns your mobile device into a personal tour guide and it works offline, so no data plan is needed when traveling abroad.