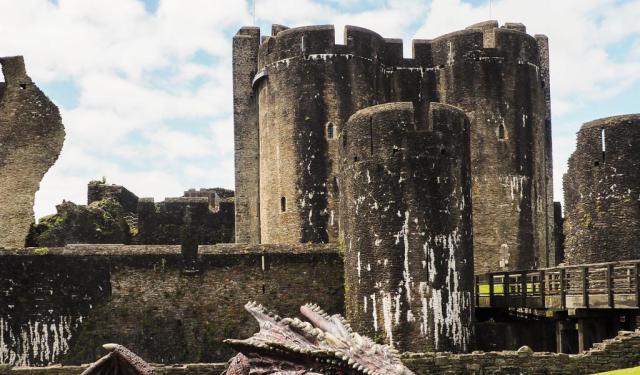 Caerphilly - The Largest Castle in Wales, Caerphilly, Wales (B)

Even if you don’t know how to pronounce the mysterious name of Caerphilly, it certainly is worth visiting its castle, the largest in Wales, located just a short drive from the capital, Cardiff.

The castle surrounded by huge green grounds and water defences is the monument to its 13th century owner’s ambitions to rule the South of Wales and scare off his enemies coming from the North.

Apparently, after hearing of the castle’s impressive and newly-invented defence systems the enemies immediately got the message and didn’t even attack the castle!

Caerphilly Castle is said to be one of the largest castles in Great Britain and a very well-preserved Medieval military masterpiece.

On a very windy June day Caerphilly Castle felt somewhat empty, which didn’t leave us disappointed since photo opportunities were not interrupted by fellow travellers trying to pose in the same spots as us

Approaching the castle from the wrong side first, we were forced to walk around the green grounds and castle walls to finally reach the castle’s actual entrance. ...... (follow the instructions below for accessing the rest of this article).
This article is featured in the app "GPSmyCity: Walks in 1K+ Cities" on iTunes App Store and Google Play. You can download the app to your mobile device to read the article offline and create a self-guided walking tour to visit the attractions featured in this article. The app turns your mobile device into a personal tour guide and it works offline, so no data plan is needed when traveling abroad.