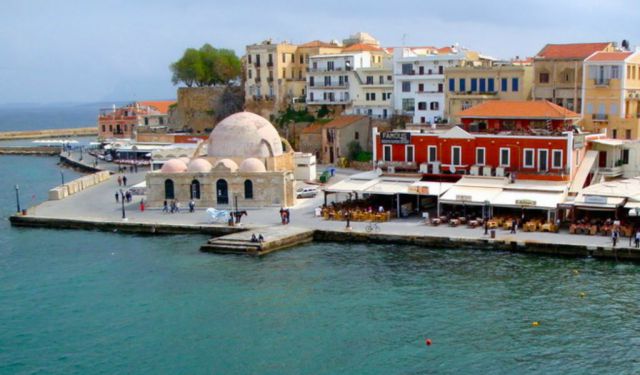 Chania is a big town. It is a city really. But 90% of Chania you will never see unless you plan to live here. For those visiting for a few days or a week there are few places outside the Old Town that you will need to know about. Just imagine a modern city that has sprung up around a medieval fortress with giant walls and even a moat, and within these walls are the buildings and ruins of the people who have settled here over the ages from the Minoans to the Byzantines, Venetians, Turks and the current inhabitants, a mixture of Greeks, Albanians and other nationalities. Most of the major buildings came courtesy of the Venetians who bought the island of Crete after the fall of Constantinople and preceded to fortify Chania which they controlled until 1645 when it fell to the Ottoman Turks. The center of the town was Kasteli which in those days meant it was the most heavily fortified, being the acropolis (upper village). It is also where the remains of the Minoans were uncovered. The massive wall surrounding Kasteli had four gates, two of which were destroyed by German bombing during the Second World War, the other two which are still intact. As the city spread out from Kasteli a new outer wall was built in 1538 and the inner wall and towers were turned into houses. If you walk up Kanevaro street from Venizelos Square you can see remnants of this older wall. ...... (follow the instructions below for accessing the rest of this article).
This article is featured in the app "GPSmyCity: Walks in 1K+ Cities" on iTunes App Store and Google Play. You can download the app to your mobile device to read the article offline and create a self-guided walking tour to visit the attractions featured in this article. The app turns your mobile device into a personal tour guide and it works offline, so no data plan is needed when traveling abroad.