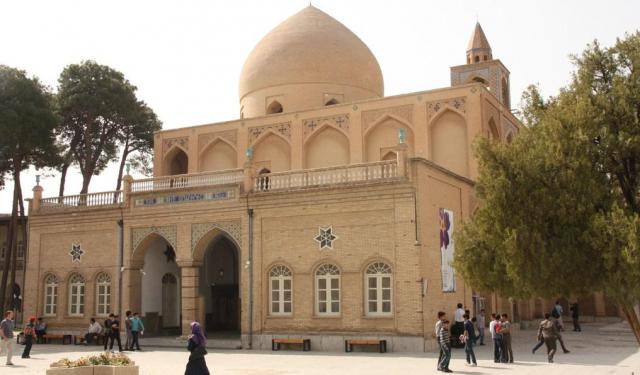 Churches and Coffee in New Jolfa, Esfahan, Isfahan, Iran (B)

New Jolfa is the Armenian quarter of Esfahan established in 1606 by Shah Abbas I during the Safavid era. The Armenians were fleeing the Ottoman Empire’s persecution and because Iran and Armenia had a long history of close relations, Shah Abbas relocated 500,000 Armenians to Persia. New Jolfa quarter became their new home and over time, the Armenians became active in the cultural and economic development of Persia.

Shah Abbas treated the Armenian population well, as such, the Armenians were able to assimilate with the Persians while keeping their Christian faith and Armenian traditions. In the 20th century particularly during the times of Reza Shah and Mohammad Reza Shah until the Islamic Revolution in 1979, the Armenians were quite influential in the arts and sciences, economy and services sector. However, due to the Revolution, about 20,000-25,000 Armenians left Iran for Soviet Union or Soviet Armenia.

The current population of Armenians in Iran is approximately 300,000 residing mainly in Tehran, Tabriz and Esfahan. Their community and culture are still flourishing amidst Iran’s Shiíte Islam rule. There are Armenian churches, schools, cultural centres, sports clubs, associations, libraries, newspapers, books, journals, etc. They are also represented in Parliament. ...... (follow the instructions below for accessing the rest of this article).
This article is featured in the app "GPSmyCity: Walks in 1K+ Cities" on iTunes App Store and Google Play. You can download the app to your mobile device to read the article offline and create a self-guided walking tour to visit the attractions featured in this article. The app turns your mobile device into a personal tour guide and it works offline, so no data plan is needed when traveling abroad.