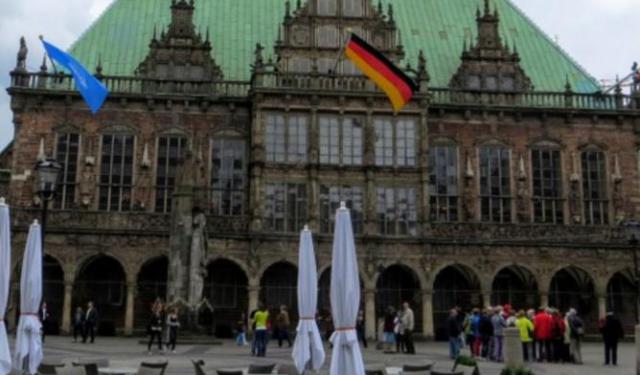 Cycling through Bremen, Bremen, Germany (B)

Bremen is a city municipality and a major cultural and economic hub. It is situated on both sides of River Weser, in north Germany. When we were in Hamburg, we visited this city on one sunny, pleasant day.

There are trains every hour from Hamburg to Bremen. Just outside the Bremen station, we found a rental bicycle center. Bremen is more or less flat and a small city. Therefore we rented bicycles and started for the day cycling through Bremen!

At first, we went to Bremen Rathaus (town hall). It is built between 1405 and 1410 in Gothic style and it is one of the greatest north German architecture. In front of this heritage building, there is a ‘Roland statue’. This statue represents the freedom and market rights. The Roland statue and the town hall building are UNESCO World Heritage sites.

In one of the corners in this crossroads, an open-air theatre was set up. We stopped there with curiosity. In a short while, they started a show for children – The musicians of the Bremen. What a surprise, we were watching a live show of this fairytale in the city of its origin! The show was excellent, full of fun and entertainment. ...... (follow the instructions below for accessing the rest of this article).
This article is featured in the app "GPSmyCity: Walks in 1K+ Cities" on iTunes App Store and Google Play. You can download the app to your mobile device to read the article offline and create a self-guided walking tour to visit the attractions featured in this article. The app turns your mobile device into a personal tour guide and it works offline, so no data plan is needed when traveling abroad.