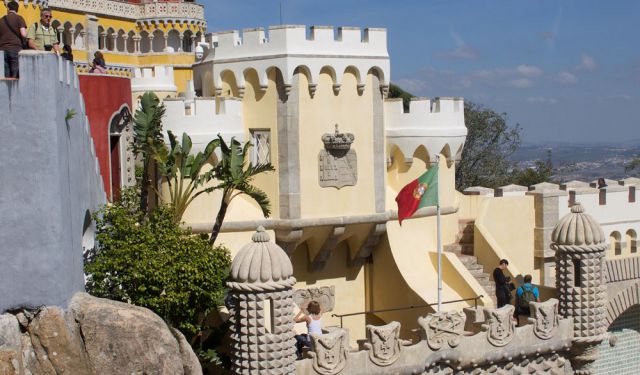 On our last full day in Portugal, we decided to once again hop on the train and explore one of the historical cities surrounding the capital. This time, our trek would take us to Sintra.

Without getting into too much detail, the morning of our Sintra trip I woke up and did not feel good, and little did I know that this would be the first of eight days of feeling disgusting. In retrospect, I should have stayed home; but ever the wanderluster I forged on and we hopped on the train for Sintra.

30 minutes (and €2.15) later and we were in Sintra. Dave had done all the research for this day trip so I didn’t know what to expect, but upon first sight I was blown away. The hills were covered in luscious forests, and dotted throughout were beautiful, colourful castles and mansions. Despite not being 100% well, I was ready to explore.

A smaller town Sintra has a population of just under 380,000 (as per Wikipedia), but given its UNESCO World Heritage status, hordes of tourists flock to the city each day. After getting off the train, we followed the crowds and hopped on Sintra’s Tourist Bus (#434). Specially designed for tourists, the bus links the train station to all the major sites, including Pena Palace, the Moors Castle and the historic centre – and at just €5/each it was a steal. ...... (follow the instructions below for accessing the rest of this article).
This article is featured in the app "GPSmyCity: Walks in 1K+ Cities" on iTunes App Store and Google Play. You can download the app to your mobile device to read the article offline and create a self-guided walking tour to visit the attractions featured in this article. The app turns your mobile device into a personal tour guide and it works offline, so no data plan is needed when traveling abroad.