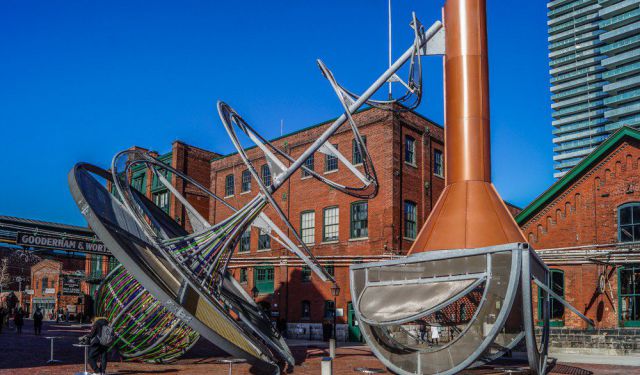 The Distillery District is a pedestrian village with boutiques, art galleries, ateliers, cafes, and restaurants. It’s the largest and best-preserved collection of Victorian Industrial Architecture in North America. The area is compact, with 10 brick-paved streets and 40 heritage buildings of the former Gooderham and Worts Distillery. It’s a great place to visit on a sunny afternoon. Stroll around the streets, admire the art installations, visit the shops, drink some coffee or maybe a craft beer. Throughout the year, the district has special celebrations and events such as the artisans in the Distillery Craft Shows, Contact Photography Festival, the Luminato Festival, and the Distillery Christmas Market.

The Gooderham and Worts Distillery was founded in 1832. It grew from a small windmill to the largest distillery of the British Empire. The oldest building in the complex is the Stone Distillery built in 1861. Other buildings soon followed as business expanded. The district grew larger each year until the beginning of the World War One and the prohibition legislation in 1916. After that, it began its gradual downfall until the site was abandoned in 1990. After 158 years of industrial activity, the magnificent industrial complex was shut down. More than a decade later the area was revitalized to become an art and cultural centre. The revitalization process resulted in a pleasant location that kept the original industrial aspect while at the same time gained a creative focus. ...... (follow the instructions below for accessing the rest of this article).
This article is featured in the app "GPSmyCity: Walks in 1K+ Cities" on iTunes App Store and Google Play. You can download the app to your mobile device to read the article offline and create a self-guided walking tour to visit the attractions featured in this article. The app turns your mobile device into a personal tour guide and it works offline, so no data plan is needed when traveling abroad.