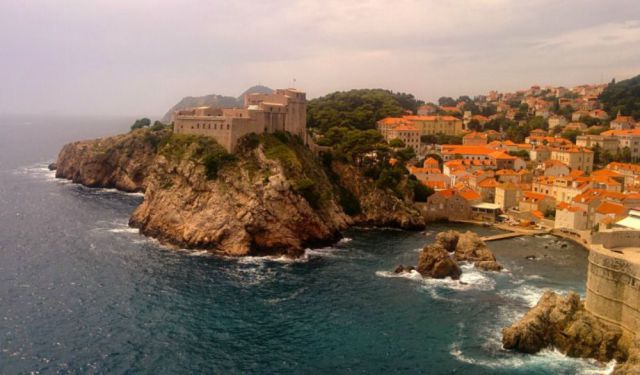 Like some place out of a fairytale or TV show; the fortified old town of Dubrovnik captures the imagination like few other cities. This truly spectacular peninsula has become one of the more famous tourist destinations in this part of the world over the last few decades, and has recently seen a huge surge in interest after featuring in Game Of Thrones as the main filming site for Kings Landing; the central city in the show. The old town has become almost entirely a tourist experience but even if tourist traps aren’t your thing, don’t worry, Dubrovnik still has a lot to offer.

We were there for two nights after a few days in the comparatively sleepy Korčula, looking for some excitement to end our time in Croatia.

From Korčula we caught a ferry with Kapetan Luka to Dubrovnik and it took about two hours, costing €16 (120kn) each. In the high season (June-August) ferries will run every day, but in the low season it pays to do some date specific research before you travel, or be flexible on your departure. Another ferry company servicing that route in the high season are G&V their ferry stops at Korčula in July and August, a ride to Dubrovnik costs €12 (90kn), takes 2.5 hours and departs late afternoon. You buy your tickets for either service in person at the dock either on the day of, or the day before departure. Once you dock in Dubrovnik you can either find a bus or a taxi to get you to your accommodation. Our taxi cost €13.50 (100kn) to our apartment above the old town. ...... (follow the instructions below for accessing the rest of this article).
This article is featured in the app "GPSmyCity: Walks in 1K+ Cities" on iTunes App Store and Google Play. You can download the app to your mobile device to read the article offline and create a self-guided walking tour to visit the attractions featured in this article. The app turns your mobile device into a personal tour guide and it works offline, so no data plan is needed when traveling abroad.