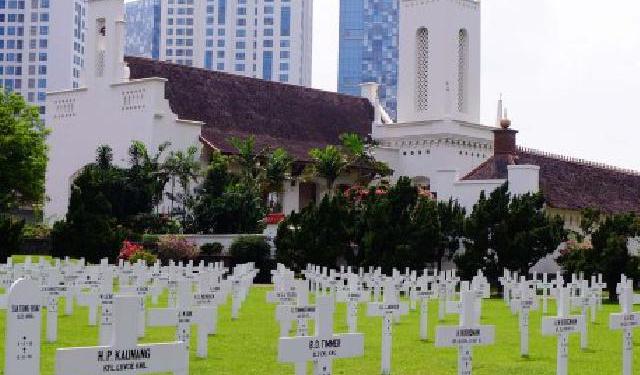 It is quite a wonder that in Jakarta, Indonesia’s capital surrounded by shopping malls and tall buildings, still has a few hidden green areas left delivering a piece of Indonesian history during Dutch colonization era. Situated in South Jakarta, Ereveld Menteng Pulo, the honorary cemetery, is one of it. Those days, Menteng Pulo was a suburban area of Menteng, somewhat isolated from the crowds. Once you walk in and pass the gate, the common perception about cemeteries in Indonesia, which is often filthy and frightening, will soon fade away.

Speaking of which, there’s an interesting story behind Menteng itself. Menteng is a luxurious residential area in South Jakarta where high rank government officials live, as well as the place where the 44th President of the United States, Barack Obama, spent his 4-year childhood in Indonesia. If there’s no traffic jam, from Menteng to Menteng Pulo takes about 10 minutes by car.

Ereveld Menteng Pulo is the resting place for over 4000 war victims of World War II (1939-1945), especially who died from a Japanese concentration camp, and the revolution after that (1945-1949). The honorary cemetery was inaugurated on December 8, 1947, managed by Netherlands War Graves Foundation or OGS (Oorlogsgravenstichting). ...... (follow the instructions below for accessing the rest of this article).
This article is featured in the app "GPSmyCity: Walks in 1K+ Cities" on iTunes App Store and Google Play. You can download the app to your mobile device to read the article offline and create a self-guided walking tour to visit the attractions featured in this article. The app turns your mobile device into a personal tour guide and it works offline, so no data plan is needed when traveling abroad.