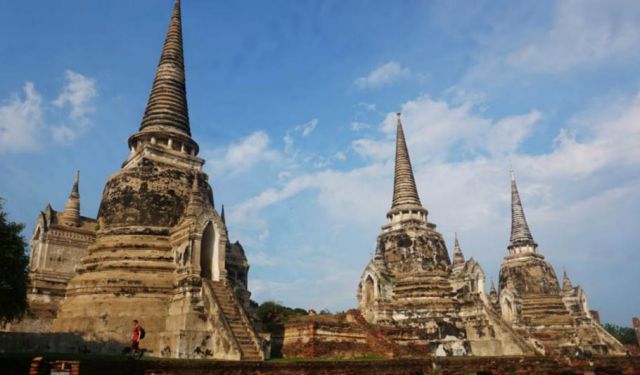 Exploring Ayutthaya: The City of Ruins, Ayutthaya, Thailand (B)

If you’ve been following us on Facebook and Instagram, you would know that apart from trying to travel as much as we can, we’re also [re]discovering Thailand through adventures, sightseeing and brushing up on its culture/history.

So last weekend, we decided to drive down to Ayutthaya. This was the old capital of Thailand up until it was burned down by the Burmese army in 1767. It is now in ruins, hence its nickname, The City of Ruins.

Now we’re not here to give a history lesson but we’ll give some interesting facts and Did you know’s along the way. If you really to divulge in the history, we recommend you visit this site: History of Ayutthaya.

The city is only 85 km from Bangkok, past the Don Muang Airport and Pathumthani province. Normally it would just take over an hour to get there but we had a few stops so it took us a bit longer.

As we entered the city, we realized we hadn’t really planned this trip well. We had no idea what we wanted to see (except a few sites I saw on Instagram) and what we should see. It wasn’t like it was a totally spontaneous trip either but we figured how much can there be? Oh boy, were we wrong. ...... (follow the instructions below for accessing the rest of this article).
This article is featured in the app "GPSmyCity: Walks in 1K+ Cities" on iTunes App Store and Google Play. You can download the app to your mobile device to read the article offline and create a self-guided walking tour to visit the attractions featured in this article. The app turns your mobile device into a personal tour guide and it works offline, so no data plan is needed when traveling abroad.