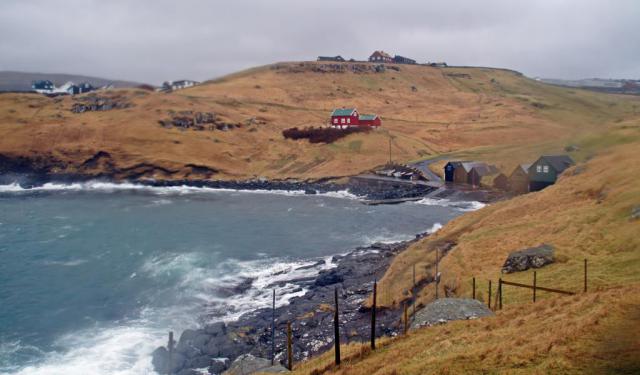 Exploring the Dramatic Coastline of Torshavn, Torshavn, Faroe Islands (B)

On March 27th, it was finally time to head back to the Faroe Islands, my favourite piece of the Earth, where I spent Easter with my friend Andras and his family and five dogs. It was my eighth visit to the country, but still I was just as excited as always to go back. I really never get tired of visiting the Faroe Islands over and over again. I arrived at 8 PM after a foggy flight, where I got to see a bit of the south coast of Norway on the way, and also had a beautiful landing where I could see bits of the Faroe Islands between the thick clouds.

Andras picked me up at the airport and after a quick change of outfit, we were already out of the door on our way to his brother Geir’s birthday. We had a cozy evening with Geir, his girlfriend, his son, Andras’ two nieces and Andras’ parents. The three children are a great example of how clever Faroese children in general are with all the languages they speak. I talked to them in Danish and English and they understood it all and were able to answer in those languages as well. Since Faroese is their mother tongue, and they learn Danish in school and English from watching tv and youtube, most Faroese children speak three languages already at a young age. Later on, they also learn German, French or Spanish in school! It’s very impressive and definitely makes me want to move there (even more) when I eventually have children. After having coffee and cake at Geirs’, Andras and I were off to the gym for some midnight training! Well, Andras basically did all of the training, while I just acted as his photographer and moral support. ...... (follow the instructions below for accessing the rest of this article).
This article is featured in the app "GPSmyCity: Walks in 1K+ Cities" on iTunes App Store and Google Play. You can download the app to your mobile device to read the article offline and create a self-guided walking tour to visit the attractions featured in this article. The app turns your mobile device into a personal tour guide and it works offline, so no data plan is needed when traveling abroad.