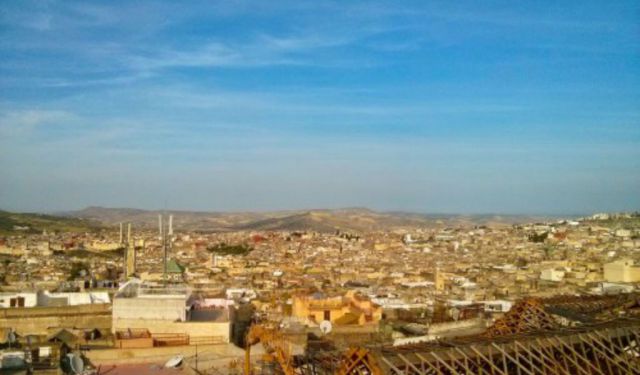 Fez is the second largest city in Morocco and the world’s oldest walled medieval city. The Medina Fés el-Bali is a UNESCO world heritage site filled with donkeys, motorbikes, mosques, food and people all competing for inches of space, but depspite this, Fez has a more relaxed atmosphere than Tangier or Marrakech. There seems to be a more traditional feeling to the people and the architecture; more religious and patriotic than some of the modern glitz other Moroccan cities are adopting.

We were in Fez for one night to celebrate my birthday before heading to the Sahara. And celebrate we did.

Fez is a major city and is very well connected. To get to Fez from Chefchaouen you can catch a bus or hire a grand taxi but it’s quite a distance so a taxi would be expensive. We opted for the cheaper option and took a CTM bus.

Bus – There will be numerous busses departing from Chefchaouen bus station (Gare Routiere), most of which are small local operators (quality not guaranteed). You can turn up on the day to buy tickets if you like the risk factor, but if you prefer to pre-book you can buy tickets online through CTM. A bus departs from Chefchaouen to Fez roughly three times a day, costs around 75MAD (£5.20) per person and takes around 4.5 hours. CTM busses are of a fair quality and will run not too far from their advertised times, however they do run on Morocco time, ‘god willing’ (Insha’Allah), which is very relaxed so expect to depart anywhere from 20 minutes to an hour after the scheduled time. From the Fez bus station, it’s easy to get a petit taxi close to your accommodation, ours cost 60MAD (£4.20). ...... (follow the instructions below for accessing the rest of this article).
This article is featured in the app "GPSmyCity: Walks in 1K+ Cities" on iTunes App Store and Google Play. You can download the app to your mobile device to read the article offline and create a self-guided walking tour to visit the attractions featured in this article. The app turns your mobile device into a personal tour guide and it works offline, so no data plan is needed when traveling abroad.