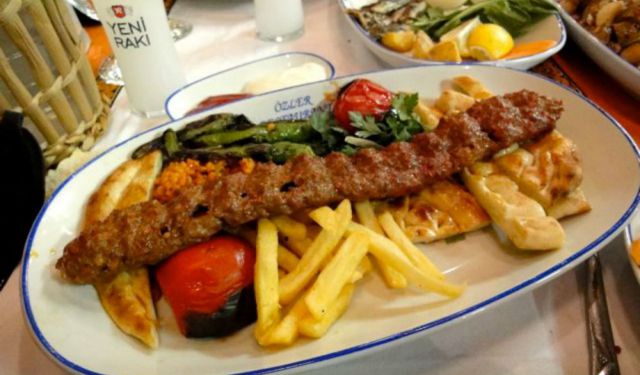 It’s no surprise that there are obvious similarities between Greek and Turkish food. No one in America really knows the difference between a kebab and a gyro, Greek and Turkish coffee, loukoum or loukoumia. Then the Arabs were pulled into it and things got even more confusing. Babaganoushlooks just like melitzanosalata (eggplant salad), though Greeks don’t garnish theirs with pomegranate seeds, but tend to add walnuts. Is baklava Greek? Is souvlaki like doner kebab? Trying to answer and explain these questions is like trying to untangle the intermingled histories of east and west. The only thing that really matters is using the right word for the right dish in the right country. Don’t ask for a gyro in Istanbul, and be aware that to Greek waiters, baba ganoush sound like the name of some protagonist in a children’s fairy tale. Greeks and Turks have borrowed each other’s words for centuries.

The food all tastes good. The kebab or kebap is ubiquitous in Istanbul. It can be found on every corner and on every menu in the city. The doner, is basically that big round stack of unidentifiable meat spinning vertically in the window of the store. It’s no accident that you can see it from the street. That chunk of oozing fat and crunchy wonder is supposed to make your mouth start watering. There are a million ways to serve it, the most basic being between a sandwich roll. This is one of Turkey’s big disappointments. The sandwich version of the kebab is mostly bread with skimpy half handful or meat slipped in with a few onions and some tomato. The hot sauce redeems it some, but not much. For those of you used to a hot, greasy, stuffed gyro filled with tzatziki, chunks of meat, tomato, onion, parsley and paprika-salt, you are in for a rude awakening. The answer is to order the kofte kebab platter(photo) which is a kind of minced lamb on a skewer, and can come with rice and fresh salad on the side. There are infinite variations of doner and kofte, one of the most amazing being the Iskender kebap. This culinary wonder is a platter of doner layered with a special bread, cheese, yogurt, tomato sauce and eggplant. Order this at one of the popular meyhanes in Beyoglu, so that your first impression is positive. I don’t recommend this at cheap restaurants and ‘fastfood” shops unless someone has recommended one as particularly good. ...... (follow the instructions below for accessing the rest of this article).
This article is featured in the app "GPSmyCity: Walks in 1K+ Cities" on iTunes App Store and Google Play. You can download the app to your mobile device to read the article offline and create a self-guided walking tour to visit the attractions featured in this article. The app turns your mobile device into a personal tour guide and it works offline, so no data plan is needed when traveling abroad.