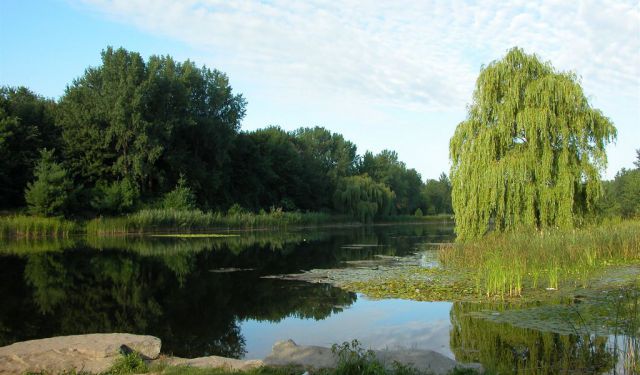 Forest in the City, Montreal, Canada (B)

Although sandwiched between an awkward mass of commercialdevelopment and residential property, the 97-hectare Angrignon Park still manages to be a significant natural retreat. Situated in southwest Montreal, Canada, access to the park is assured for pedestrians, cyclists, and drivers by the presence of a metro station (subway) (Angrignon Metro), bike path, and several parking lots (Parking 1) (Parking 2). This accessibility is important in designing green spaces in urban areas; the simpler it is to get there, the more the space will be used. Outdoor exercise groups find it easy to meet up here, and many different communities use the facilities regularly during the warmer months for concerts and barbecues.

You don’t have to go far into the park to forget the city you just left behind. The noise of traffic fades, to be replaced with the music of songbirds and children’s laughter. Four Seasons Park would perhaps be a more suitable name, as the place is as beautiful and easily reached at any time of the year. Living nearby allows you to follow its transformation as it unfolds from week to week. You could spend a decade exploring this park, and it would never be exactly the same each time you return. In fact, it has housed a zoo, a farm, and a children’s fort during the many years that have passed since its beginnings in 1926. ...... (follow the instructions below for accessing the rest of this article).
This article is featured in the app "GPSmyCity: Walks in 1K+ Cities" on iTunes App Store and Google Play. You can download the app to your mobile device to read the article offline and create a self-guided walking tour to visit the attractions featured in this article. The app turns your mobile device into a personal tour guide and it works offline, so no data plan is needed when traveling abroad.