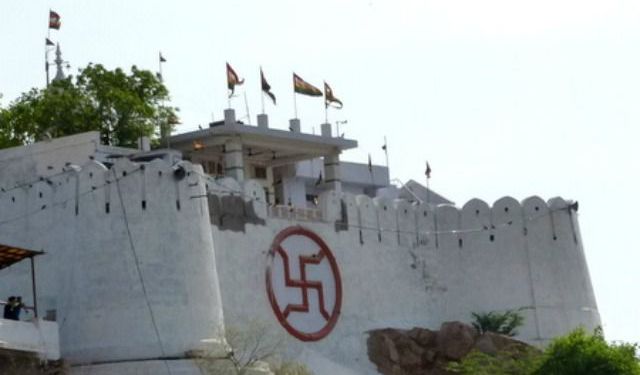 The Garh Ganesh temple is situated on a small hillock overlooking Jaipur city on the Nahargarh hill range. It’s difficult to miss the Garh Ganesh Temple if you happen to be in the old walled city area of Jaipur, especially in the City Palace complex.

It’s outward appearance doesn’t look like a temple. The typical temple features like Shikhar or carvings, etc are completely missing in Garh Ganesh temple. It’s rather designed as a small fortification. The word Gad or Garh in Hindi means small fort. It’s called Garh Ganesh templebecause this temple is dedicated to the Lord Ganesha. In this temple, the idol of Lord Ganesha is in a child form.

There is only one access point to the Garh Ganesh Temple – the staircase originating in Brahampuri area near Gaitore. These steps are pretty steep and uneven in height, which is forgivable considering the gradient of the climb and the time period when they were first built. The metal railing which segregates the staircase in two parts doesn’t help either. The ergonomics of the railing have been completely ignored! ...... (follow the instructions below for accessing the rest of this article).
This article is featured in the app "GPSmyCity: Walks in 1K+ Cities" on iTunes App Store and Google Play. You can download the app to your mobile device to read the article offline and create a self-guided walking tour to visit the attractions featured in this article. The app turns your mobile device into a personal tour guide and it works offline, so no data plan is needed when traveling abroad.