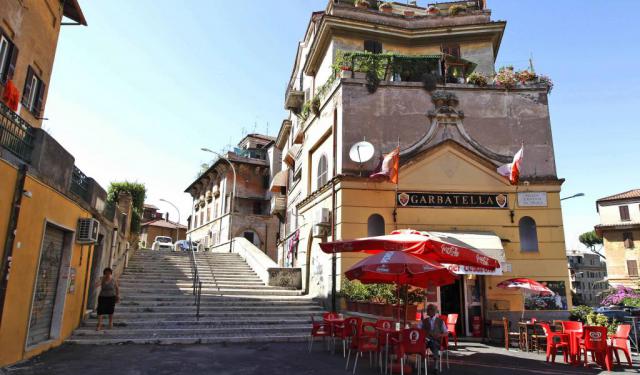 After our Pigneto, San Lorenzo,Borgo Pio, Prati, Flaminio, Monti and Trastevere pieces there we are again on the field, around Rome’s lesser known boroughs. This time we want to take you to Garbatella, one of the hippest areas of Rome which actually started in a very humble way and was considered for several decades a slum.

This neighborhood was created in the 1920s to accommodate the working class of the Ostiense industrial district and to host people who had to leave their downtown houses due to Mussolini’s demolitions and changes in the city centre. The urban model adopted for this part of Rome was the English garden suburb: low-rise houses, surrounded by small gardens and pocket-sized parks. Even if this a very recent borough for Rome’s standards, the origin of the name is still a mystery: most people attribute it to the nickname of Carlotta, an inn-keeper, who was loved by everyone in the area. And the symbol of Garbatella is the Carlotta fountain with its romantic stairs. ...... (follow the instructions below for accessing the rest of this article).
This article is featured in the app "GPSmyCity: Walks in 1K+ Cities" on iTunes App Store and Google Play. You can download the app to your mobile device to read the article offline and create a self-guided walking tour to visit the attractions featured in this article. The app turns your mobile device into a personal tour guide and it works offline, so no data plan is needed when traveling abroad.