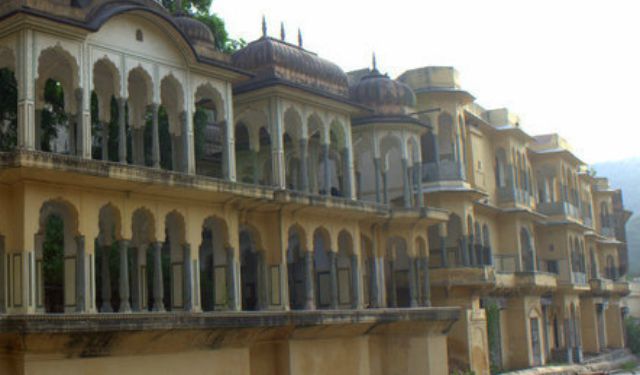 “….The pass grew narrower, the path steeper & more rugged as we proceeded along with it & the little stream which we were ascending instead of dimpling amid the grass & stones now leapt & bounded from crag to crag like a Welsh rivulet. Still all was wild & dismal when on a turn of road we found ourselves in front of a high turreted & battlement wall, pierced with a tier of arched window & showing us beyond them the dark green shades of a large oriental garden……”

Reginald Herber, Bishop & traveler who reached Jaipur on 28 January 1825 described Ghat ki Guni in his memoir – Narrative of a Journey through the Upper Provinces of India from Calcutta to Bombay 1824–1825.

Ghat ki Ghuni or Ghat ki Guni is a narrow alley between Aravali hill range dotting East direction in Jaipur. It provides access to the areas situated in the East of Jaipur & beyond. It is also starting point of the road that leads to the Agra – city of Taj Mahal, hence called Agra Road.

For a newbie, visiting Jaipur for the first time & entering the city from Ghat ki Guni, the architecture will surely enthrall him. It has a beautiful facade lining both sides of the road, adorned by the jharokhas and chhatris –which is typical of the Jaipur architecture. ...... (follow the instructions below for accessing the rest of this article).
This article is featured in the app "GPSmyCity: Walks in 1K+ Cities" on iTunes App Store and Google Play. You can download the app to your mobile device to read the article offline and create a self-guided walking tour to visit the attractions featured in this article. The app turns your mobile device into a personal tour guide and it works offline, so no data plan is needed when traveling abroad.

Create Your Own Self-Guided Walks in Jaipur
Guide Name: Ghat Ki Guni….. In a Class of It's Own!
Guide Location: India » Jaipur
Guide Type: Self-guided Walking Tour (Article (B))
Author: Arv Jpr
Read it on Author's Website: https://jaipurthrumylens.com/2015/10/08/ghat-ki-guni-jaipur/
Sight(s) Featured in This Guide: