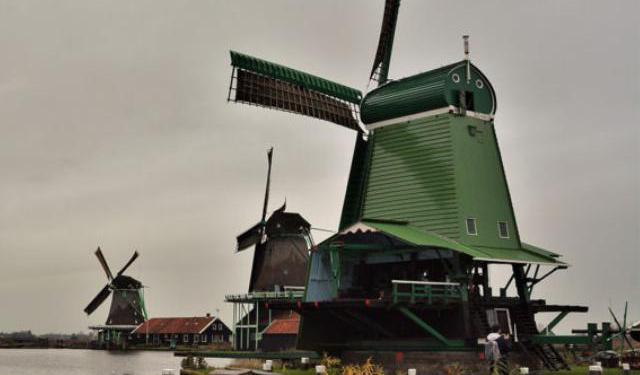 Gone with the Windmill in Zaanse Schans, Zaandam, Netherlands (B)

Although the title sound romantic as it is referred to the classic movie Gone With The Wind, but Zanse Schans in my eyes is another version of Little House On The Prairie.

If you are not familiar to Zaanse Schan, hope this post will do the favor. Zaanse Schan is a beautiful village located north of Amsterdam. A unique village wrapped in Netherlands’ special tradition and heritage, such as the windmill, canals, giant clog, traditional houses, warehouse and many more.

I was thrilled as I reached the village. Under the fine, soft rain, I marched around the village, and instantly felt the calmness of the surroundings. Simply imagine, windmills appeared from afar, and a small canal with the clear water rushing under the wood bridge. On the other part of the scene some farm animals, play around freely. A duck stands still silently under the rain, a goat approached the visitors with a face full of curiosity while the rest of these “inhabitant” do their “usual business” without caring a bit of the outside world. ...... (follow the instructions below for accessing the rest of this article).
This article is featured in the app "GPSmyCity: Walks in 1K+ Cities" on iTunes App Store and Google Play. You can download the app to your mobile device to read the article offline and create a self-guided walking tour to visit the attractions featured in this article. The app turns your mobile device into a personal tour guide and it works offline, so no data plan is needed when traveling abroad.