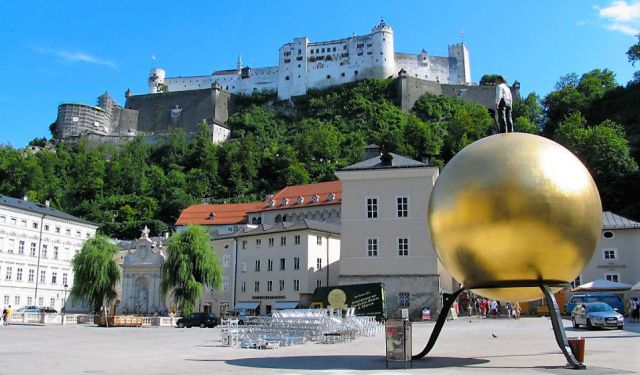 You’ll find elsewhere that people refers to Salzburg as a “Baroque jewel”, plentiful of both architectural and historical treasures.

The Baroque churches, building façades, parks and fountains were commissioned by the Prince Archbishops in the 17th and 18th centuries, and earned to the city the nickname “Rome of the north”.

A short walk along the narrow streets and passages will also reveal you a number of treasures dating back to the medieval, romantic, and renaissance periods, together with the classical architecture associated to the monarchy and governmental buildings.

The beauty, rich heritage and spectacular setting led in 1997 to the well deserved inclusion of Salzburg in the UNESCO list of World Cultural Heritage sites.

Oh, and it’s also the birthplace of Wolfgang Amadeus Mozart –a fact you’ll notice throughout your entire visit.

And the classical movie “The Sound of Music” was filmed in the surroundings of the city, by the way.

The historical area of the town is naturally divided into two parts by the River Salzach –quite obviously, the right bank and the left bank-, the left bank being the older one, where some of the earliest evidence of settlements can be dated back to Roman era. ...... (follow the instructions below for accessing the rest of this article).
This article is featured in the app "GPSmyCity: Walks in 1K+ Cities" on iTunes App Store and Google Play. You can download the app to your mobile device to read the article offline and create a self-guided walking tour to visit the attractions featured in this article. The app turns your mobile device into a personal tour guide and it works offline, so no data plan is needed when traveling abroad.